Last week, Feb 25, these were IDEAS THAT STOOD OUT FOR YOU (from end-of-class check-in’s):

REVISIT “BIAS”:  you may recall a few weeks ago, speaking of bias, I mentioned the famous WEIRD study (“The weirdest people in the world?” Henrich et al. 2010:  Click HERE).  But NOW, look at this: (shared by Phil Regal on 1 March 2020: https://getpocket.com/explore/item/how-knowledge-about-different-cultures-is-shaking-the-foundations-of-psychology    (The A&O webnotes on BIAS)

Of course biologists want to know more about how gender and gender preferences are formed during development — at another level, however (our A&O multi-level approach) how does GENDER affect perception?

More about THE BRAIN as CAUSE and CONSEQUENCE, REALITY and METAPHOR

The awesome—perhaps inconceivable complexity of the human brain

It is a nexus[i] and it serves in ART & ORGANISM as an anchor for discussions about how structure can serve function and Levels of Organization.

“A first step in understanding mind–brain mechanisms is to characterize what is known about the structure of the brain and its organizing principles. The brain is a complex temporally and spatially multiscale structure that gives rise to elaborate molecular, cellular, and neuronal phenomena [3] that together form the physical and biological basis of cognition. Furthermore, the structure within any given scale is organized into modules – for example anatomically or functionally defined cortical regions – that form the basis of cognitive functions that are optimally adaptable to perturbations in the external environment.” (Bassett & Gazzaniga 2011)[ii]

One gene has multiple effects on traits;

each trait is affected by multiple genes.

COMPETITION BETWEEN NEURONS (SfN image of the week)

REVIEW of CORE TENETS of NATURAL SELECTION and RITUALIZATION:

NOW, exemplary of the often circuitous paths of evolutionary change.  AND for us as scientists interested in the communicative function of art. 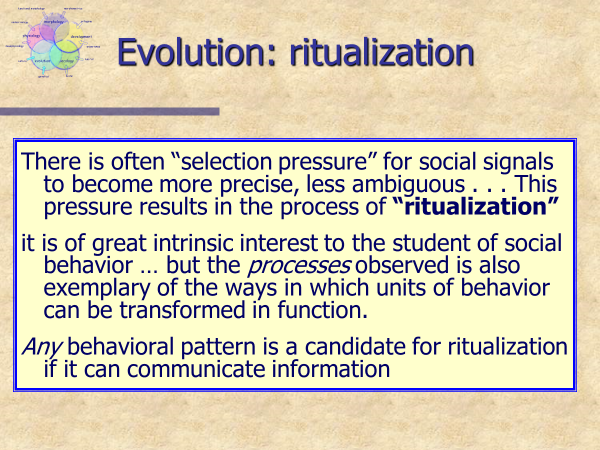 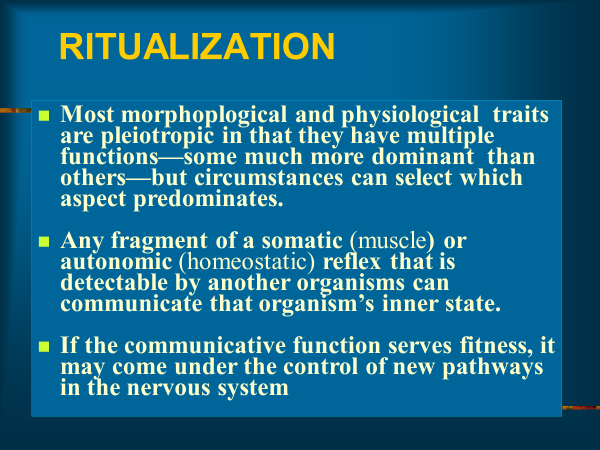 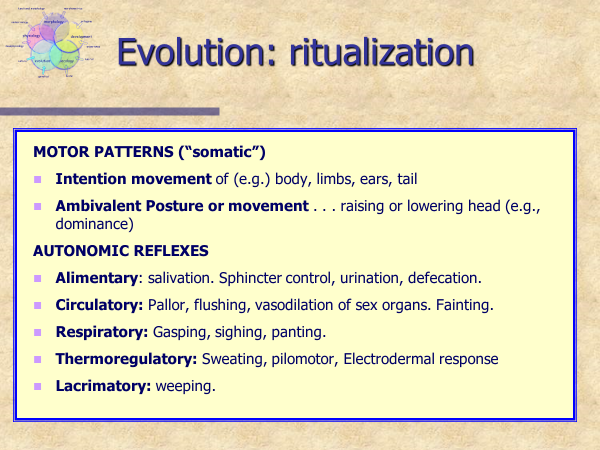 [i] A NEXUS is the most important place in a collection of connections .  It comes from the Latin “nectere” (“to bind”), the same Latin root that gave rise to “connect.”