Why Was Cynthia in Tears?

in Art & Organism We speak often albeit briefly about the diversity of emotional responses to art.  I shared my own experience of Cynthia’s Tears:  with 8 or 9 students touring MoMA in NYC we “lost” Cynthia.  Backtracking we found her standing in front of a  painting– a great painting but we couldn’t understand why it affected her so powerfully.  We admired the painting but were more affected by her response.  We looked more closely.   What had she seen that we could not?  That question is obviously the tip of an iceberg… The painting was  Pavel Tchelitchew’s Hide and Seek (1942).  But what one sees is only part of the equation.

HIDE-and-SEEK.  [in MoMA Magazine (May 31, 2019),  journalist Hamilton Morris explored a psychedelic cult that flourished briefly in New York City in the 1970’s.  The Pavel Tchelitchew’s painting, Hide-and-Seek (1940), on display at the Museum of Modern Art, emerged as a significant element in the group’s practice.  Read “Finding Hide-and-Seek.”] It was removed from display in 1987. 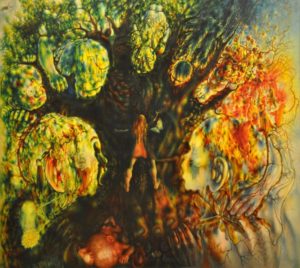 Cynthia’s tears were and example of an overflow of EMOTIONS that were sufficiently felt to break into public. Some people experience an emotional response before they’ve even thought about it–in fact it is as though their physiological response becomes externally manifest in order to inform them of how seriously they should take how they’re feeling.

Rothko Chapel.  Of course such experiences of  being informed about a very affecting situation by your uncontrolled reactions is by no means rare, but some places allow (or evoke) such expressions much more than others.  For example, people are often surprised by their emotional response to the Rothko Chapel.  Three triptytchs and five single paintings are on the walls of a space designed to facilitate meditation, Morton Feldman’s music plays.  The experience was decribed by Jacqui Shine for the NY Times Magazine in  2017.   Listen to Pat Dowell’s commentary on National Public Radio.   Evoking emotion was Rothko’s ambition; read  a little more about Rothko from MoMA.

Chauvet Cave. Another moment of tears was experienced by the leader of a film crew interviewing visitors to Chauvet Cave with its collection of paleolithic art.

A fly on the wall.  Outside the cave I ate a French picnic of bread and cheese, washed down with red wine, in the shade of the scrub oaks, looking out over the valley, and wondered if members of the Bear Clan had also sat here while having their lunch. Oh how I wished I could have been a fly on the walls of Chauvet 35,000 years ago!

Film crew.  On my last visit I had met and been interviewed by a film crew who were recording our reactions as we came out of the cave doorway. They had been doing this for two years but had not yet been allowed into the cave. I could not imagine anything more frustrating. On the second day of my visit they were to be allowed in for the first time and would see with their own eyes all the wonders we had been raving about. I watched the film producer Pierre Oscar Levy and his crew suit up and crawl off down the rabbit hole. I could imagine how excited they were.

Reaction.  We left the cave Pierre interviewed me again. When we had finished I asked him for his own reactions. What had he felt as he stood in front of the Horse Panel? He answered, “I cried”. I completely understood his reaction. To see the Chauvet Paintings with ones own eyes must be the greatest privilege ever to be bestowed.”  From  http://www.bradshawfoundation.com/chauvet/2nd-visit5.php