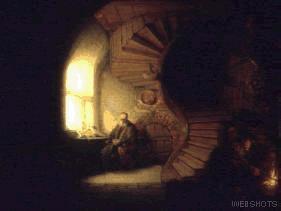 The Philosopher in His Study – Rembrandt

ART is naturally allied with SPIRITUALITY–both draw from and reach beyond conventional boundaries.  Both dispel the “lethargy of custom.” And the large areas of cognitive overlap often put them in each other’s service.

SCIENCE is sometimes viewed as a competitor, but this would be an error: science is the other great human enterprise that aspires to transcendence.

But… “… science can only be created by those who are thoroughly imbued with the aspirations toward truth and understanding. This source of feeling, however, springs from the sphere of religion. To this there also belongs the faith in the possibility that the regulations valid for the world of existence are rational, that is, comprehensible to reason. I cannot conceive of a genuine scientist without that profound faith. The situation may be expressed as an image: Science without religion is lame, religion without science is blind.” (Albert Einstein, 1941)[i]

In other words, art, science, religion are all unique but more-or-less overlapping constellations of cognitive competencies.  Each is an extension of normal human functions that have become ritualized, established, and culturally enshrined, but which often by means of their overlap can provide support for each other.

Where human competencies fail, coherence — if sufficiently urgent– is sought in the spiritual, mythic and metaphoric beliefs that can be accommodated to a the best possible story with the facts available.

There is an important sense in which we are “prepared” to behave a certain way or believe a certain thing:  it coheres, a new belief is found to be so consilient or consonant with what we have already learned that it supports or strengthens or fully realizes that constellation of ideas. “What a man believes upon grossly insufficient evidence is an index into his desires—desires of which he himself is often unconscious. If a man is offered a fact which goes against his instincts, he will scrutinize it closely, and unless the evidence is overwhelming, he will refuse to believe it. If, on the other hand, he is offered something which affords a reason for acting in accordance to his instincts, he will accept it even on the slightest evidence. The origin of myths is explained in this way.”(Bertrand Russell, from his “Roads to Freedom”)[i]

THE PROBLEM with discourse about SPIRITUALITY:

Still we can use language to take us at least partway to mutual understanding and socially enabled insight:  A working definition to invite or enable the ethological perspective allows for its natural history: the biologically-informed causes and consequences of spirituality.

“SPIRITUALITY is a state of consciousness that reflects engagement the deep and often urgent NEED to understand, a “need to know.” [see “we are infovores”] The state of consciousness can be characterized in biological as well as phenomenological terms.  The need reflects a biologically relevant need: it is to understand cause and effect relationships, a need expressed in all organisms (and living cells?) that change their behavior as a result of experience (learn, accommodate to their environments). Much of this need is accommodated by automatisms and acquired habit, but at the furthest end of the spectrum of expressions of this need is the awareness of phenomena that cannot be accommodated by our senses or cognition, they exceed our competence to understand and thereby create a sense of inferiority.    The need to know is progressively energized by affect that is recruited by real or perceived urgency.  This involves it intimately with the neuroendocrine stress system, the source of emotions.

Cause and effect relationships are the building blocks of the narratives –stories– that affect if not direct our behavior.  As such, an adaptive tool, to be most useful, the story should be built of valid (veridical) phenomena.  And should be reliable (consistently manifest).  These are qualities which can be tested or taken on faith.  Our confidence in the narrative is important to its utility and can vary with the qualities of validity and reliability.  Narratives in which we are VERY confident are regarded as TRUTH.”

Conscious awareness of an inadequate cognitive competence invites the engagement of  NON-CONSCIOUS COGNITION, the “FORCE,” the transpersonal consciousness, the transcendental  …    on the other hand, “the best things can’t be told…” 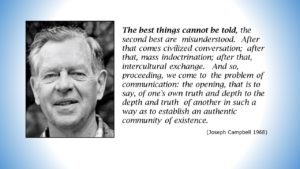 Mystery invokes the need-to-know.  In all organisms, real or perceived needs evoke coping mechanisms.  These mechanisms are highly adaptive and range in function from maintenance of an organism’s physiological stability through providing competitive advantages that serve its inclusive fitness.  Among these mechanisms, our individual and collective efforts to understand the causes and consequences of phenomena in the world are arguably among our most potent adaptive advantages.

Listen to Iris DeMent’s version of “Let the Mystery Be”

We can also argue that the attempt to understand may be more important than understanding itself:  a key lesson of evolutionary biology is that the ability to survive and prosper is a matter of being better than a competitor, not perfect !  Adaptive behavior in higher organisms involves fluent interactions between areas of the nervous system specialized for acting on the basis of established, ongoing, and prospective scenarios.  This behavior engages relatively fixed intrinsic or congenital mechanisms (such as reflexes), relatively flexible acquired mechanisms (such as habits and learning), and their imaginative reconfiguration in the light of new or anticipated circumstances (creativity, invention).

The orchestration of the relative influences of these massively interconnected parts of the nervous system that deploy these behavioral control mechanisms is an ongoing activity.  In one variant of the orchestration, we experience INTUITION, involving more-or-less conscious access to nonconscious resources.

While CONSCIOUSNESS of one’s SELF is only one of a multitude of states of consciousness and focuses on only one dimension of being, a sense of one’s self may manifest the fullest expression of the intuitive project.

Consciousness and Creativity from the perspective of DEEP ETHOLOGY

There exists in the mind “a multiplicity of functional systems that are hierarchically organized but can become dissociated from one another” (Ernest Hilgard 1977:17) (ER Hilgard Divided Consciousness: Multiple Control in Human Action and Thought. Wile, NY – cited by  1997:75)

“human cognition involves . . . many hundreds, perhaps even thousands, of internal cognitive “spaces,” each of which provides a proprietary canvas on which some aspect of human cognition is continually unfolding.”  (Churchland, 2002; quoted by Greenberg 2019)

“Most of us consider consciousness threatening because our usual methods of understanding run out of steam,” according to Colin McGinn (in his essay review of John R. Searle — “Can we ever understand consciousness?” 1999. NYRB June 10:44-48) BUT we need to start someplace!!  What is Consciousness? [more link needs repair ]

[i].  Truth of Coherence: There is an important sense in which we are “prepared” to behave a certain way or believe a certain thing: it coheres, a new belief is found to be so consilient or consonant with what we have already learned that it supports or strengthens or fully realizes that constellation of ideas. Russell’s quotes help support this case (Bertrand Russell, from his “Roads to Freedom” an e-mail contribution to SciPan by Sue Williams <fallow@MWEB.CO.ZA> Mon, 20 Sep 1999 12:40:26 +0200; Re: Our DNA and the need for religion….)