NATURAL SELECTION occurs when an organism is unable to meet its biological NEEDS, usually a result of change with which organisms try to cope (restore HOMEOSTASIS)  by means of a physiological STRESS RESPONSE: in vertebrates, a rapid sympathetic nervous system copes with emergencies and a longer-term response copes with sustained or repeated. 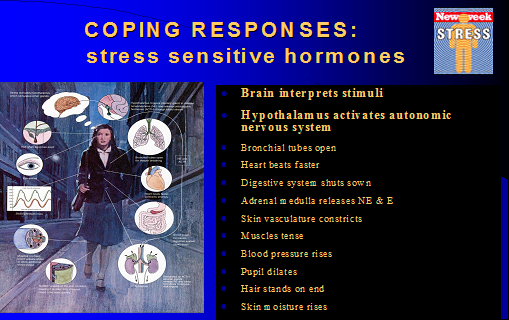 Even very mild changes can evoke coping responses:  The so-called “subclinical” response is enough to energize a motivational system in an organism, but not enough to be clinically worrisome or dangerous to health.  For example, simply being confronted with new information can evoke exploratory and cognitive changes that result in LEARNING — when new information does not match prior information with which it is automatically compared, dissonance is created (“cognitive dissonance”) and motives are energized that results in behavior changing in a way to mitigate the change–to dispel the dissonance.  (read A&O notes about some of the unexpected ways we cope with COGNITIVE DISSONANCE)

The stress response occurs when the organism receives signals indicating that the organism’s stability may be compromised   –when its “adaptive scope” (see below) is exceeded.  The generalized stress response augments and complements normal –less extreme– relatively localized coping mechanisms and helps the organism compensate for  influences or forces that may overwhelm them.  There are also internal changes in the precise nature of responses and the competence to react to stressors — rhythms of various hormones and developmental changes across the lifespan  — in some respects senescence can be regarded as a disease of stress.

Homeostasis describes the dynamic balance of interacting phenomena at (and between) an organism’s levels of organization.   It has been applied as an organizing concept of interactions, deeply informing systems biology and applied from intracellular phenomena through the ecosystem(note) (Odum 1971) — wherever multiple processes interact to maintain an general equilibrium.

Early / traditional definitions of stress were in medical terms of trauma or dysfunction –probably because those are its most conspicuous –and life threatening– expressions.  This is the likely background to an adrenal-based definition, seen occasionally in the literature.  It refers to the state of adrenal activation stimulated by the influence or detection of an environmental challenge to the body’s homeostatic mechanisms that cannot be accommodated within the normal metabolic scope of the animal.   Rooted in the  observations of adrenal hypertrophy (due to overactivity) in chronically stressed animals.

The multitude of potential challenges to the smooth pursuit of life’s essential ends led some theorists to identify stress as a normal, constitutional part of living. Hans Selye, the energizing personality that gave “stress” traction as a concept in mid century, said that stress is essential to life!   This helped counterbalance the medical (“patho-centric”) definition.   Hans Selye tried to accommodate different perspectives by distinguishing eustress (“pleasant or curative”), and distress (“unpleasant or disease-producing”)

Adaptive Scope  reflects the tolerance of any element of an interacting system to change.  The influences on adaptive scope are clearly congenital as well as acquired.

DEEP perspectives: stress is largely described (and thus explained) in physiological terms.  But other perspectives are obvious:  for example, biotic and abiotic ecological factors set the scenes, and developmental stage or experience complement the context in which all physiological processes occur.  (e.g., some functions can be adaptive in one context and maladaptive in another: rats deprived of “stress” early in life develop a sluggish, ineffective pituitary system (Ewert 1980:251) — was stress in the non-threatening context of juvenile “play” essential to development of scope?) Evolution has structured many of the competencies between taxa, including human populations with a sufficient number of generations under the same selection pressures (such as high altitude, climate, or some diseases)

Walter Cannon’s appreciation of  Claude Bernard’s crucial insight about the central importance of the  milieu interieur, led to the concept of homeostasis.  Cannon recognized that a “breaking strain” at a “critical stress” level (see I.J. Kopin on Hans Selye’s concepts more).     and popularized it in his book The Wisdom of the Body,1932. Cannon presented four tentative propositions to describe the general features of homeostasis:

“The present condition of an organism  represents its internal  past, current, and future circumstances.  That is, states of the organism that enable it to cope with ongoing (and in some circumstances, anticipated) change, and they succeed or fail largely to the extent that they are effective — or at least more so than that of competitive responses — in maintaining short term or long-term stability.

In the long term, organisms are “engineered” by bricolage to avoid danger or secure advantage for itself or its kin.   There is an extraordinary economy in the organism such that only ineffective coping at low levels will recruit the next most energetically demanding levels.  The tolerance of change before a cell or organism responds is “adaptive scope.”

The range of qualitative or quantitative changes depends on birthright and experience: development can alter how much change an organism accepts (or tolerates) –at every level of organization from single cell to integrated whole-body experience.  An analogy might be how much weight can a rope tolerate before breaking, or how much surface tension can be tolerated before water suddenly overspills the lip of its container; similarly, in thermodynamics, a phase transition can be a relatively sudden  shift from one state of matter to another (as in liquid to gas)]

We become aware of the inadequacy of a process when it is no longer as effective as a possible alternative means of establishing stability … at least stability until another “tweak” is needed.  Circumstances that create opportunities for the shift to alternative beliefs typically involve mismatches between present circumstances and a more stabilizing alternative.  Such conflicts are uncomfortable and at the highest levels of adaptive coping invite cognitive resolution – familiar as “cognitive dissonance.”

Like most processes, dissonance resolution is consciously apparent only when they are extreme enough to require awareness.  This may be a threshold as well, and one that can be measured, as numbers of neurons are “recruited” until a critical mass is attained that triggers a distinctive response.   Thus we make our way through the environment, the final arbiter of an organism’s ability to compete for limited resources or cooperate in securing resources for its group.”  (Greenberg 2009)

STRESS in ART and ORGANISM

There is relentless movement toward the lowest possible expression of unnecessary energy—ultimately the most important resource for life which must be channeled in the most productive possible ways to meet biological needs.   The outcomes of the processes by which stress is mitigated are seen to thread through every aspect of life and are richly represented–often in unexpected ways–in the expression and reception of art.  We speak of the STILLPOINT (as in the poetry of TS Eliot[i]; the center of the storm, the centering of the clay pot on the wheel)[ii] and the ANGLE of REPOSE  (that describes the “resting” shape of a cone shaped pile of sand that can be disrupted by a tiny addition).  There is reason to think of ENTROPY here.

These resting shapes seem as though some inevitable or ideal goal… but the realities of life expressed on so many levels of organization simultaneously are different: visit for example, the stress-response curve—famous in biology as a version of the Yerkes-Dodson principle, stressing the idea of an optimal point for some given function along any gradient of possibilities.  Knowing how dangerous increased stress might be for ones state of mind or health, increasing it often seems counterintuitive.  Optimal performance is often a hair’s-breadth away from disaster.

THE DEEP ETHOLOGY of STRESS

ECOLOGY — the contexts in which individuals function — climate, geology, and other animals — involves the context in which behavior occurs and the organism’s interactions with that context –key words are ENVIRONMENT and CONTEXT

EVOLUTION  — study of change across generations — the “ultimate cause” of behavior — involves biological variations that affect changes in traits. key words are GENES and MEMES.  Questions involve FITNESS  (direct or indirect).

PHYSIOLOGY  — study of how animals function — involves the “proximate” biological cause for the expression of any behavioral trait.  Key aspects are NERVOUS SYSTEM  and ENDOCRINE SYSTEM. Questions involve FUNCTION

[i] “As Modernist poets Yeats and Eliot have a lot in common. This paper attempts to seek for the still point in their poetry. The still point is achieved when harmony is maintained between antithesis, contrast, conflict. Yeats reaches this still point by use of the imagery of Byzantium as a holy city or of swans in the natural world; Eliot achieves the still point by use of the idea of logos (a center of all things) and rose-garden (reminiscent of Eden), dance. In conclusion, they, being dissatisfied with the present time, wish to reach eternity, which is translated into the moment of moments, a still point.” (“The Still Point in the Poetry of Yeats and Eliot”  June 2013  DOI:10.14354/yjk.2013.41.207  Cheolhee Lee (2013)

[ii] The center of the storm, the centering of the clay pot on the wheel.   https://sound-direction.com/the-still-point/

(note) “Conceptual transfers [of ideas related to equilibrium states and their resistance to change or elasticity or resilience once changed] to the ecology domain” were discussed by Bodin P. & Wiman B. L. B. – (Resilience and other stability concepts in ecology // the ESS Bulletin – Volume 2 Number 2 2004)

In ecology we would be relating to “the exchange of energy or biogeochemical substances between trophic levels (the components) in an ecosystem, or the system for study can be conceived as an interplay between organisms. …

… “One common misconception is that an ecological system in equilibrium (such as “metabolic equilibrium”; cf., e.g., Odum 1962, 1969, 1971) would be called “stable”. However, whether or not a system is stable relates not to its being in equilibrium but to its capacity to remain there; i.e., stability refers to the capability of the system to withstand forces tending to move it away from equilibrium and to the behaviour of the system when, if displaced from equilibrium, it strives to return (if at all) to equilibrium. ” [But what is stable can also be a trajectory]

Another not uncommon misconception in ecology is that there exists a basic ability of systems to always return to equilibrium, a kind of basic and (unfortunately) prevailing idea of ecological “homeostasis” (also known as “the Laplacian demon”) that can be, and has been, challenged on several grounds (cf. Wiman 1991).

Early ideas about ecological dynamics – such as inherent in the Lotka-Volterra equations – showed how populations theoretically could behave in a stable or an unstable manner (for a review see e.g. Bodin 2004). Among the first to use the concept of resilience in the ecological-systems realm was Holling (1973), who for that purpose partly abandoned the traditional meaning of the concept in technology (see “elasticity” above), and re-defined it:  “Resilience determines the persistence of relationships within a system and is a measure of the ability of these systems to absorb changes of state variables, driving variables, and parameters, and still persist. In this definition resilience is the property of the system and

persistence or probability of extinction is the result.” (Holling 1973, p. 17) Thus, ecological resilience as the ability of a system to return to equilibrium after a disturbance, and the manner in which it would do so, and the several other implications of stability were “condensed” into a new metaphor. In addition, community ecology, and theories of ecological succession (cf., e.g., Odum 1969, Tilman 1999), have introduced partly differing perspectives on stability (and its relationships with spatial scales, and with diversity; see below).