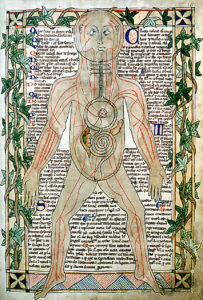 Every living thing is a sort of imperialist, seeking to transform as much as possible of its environment into itself… When we compare the (present) human population of the globe with… that of former times, we see that “chemical imperialism” has been… the main end to which human intelligence has been devoted.  (Bertrand Russell, 1960)

OUR VASTLY COMPLEX organ, THE BRAIN, is at the center of our interest

Like all living entities, the brain can be characterizes according to three main processes:

There are many systems in the body which, because of misuse or misfortune, may have their services to the organism as a whole so altered as to be actually harmful.  Thus vicious circles of causation become established which may lead to death… The development of pathological functions in a system is quite consistent with its usual performance of normal functions…  The problem is presented of attempting to learn under what circumstances the transformation occurs.  And so, in an examination of the bodily changes which characterise the strong emotions, we may admit the common utility of the changes as preparations for action, we may admit also that such changes may become so persistent as to be a menace instead of a benefit, and we may also be stimulated by this contrast to attempt to understand how it may arise.”

in DEEP ethology, PHYSIOLOGY involves the proximate processes by which homeostasis is sought.  Each process and its host tissues and organs are in constant flux and communicate with each other in ways that enable every other process to make support or make compensating adjustments.  These communications are cell-signaling, endocrine processes, and the nervous system.  When the countless adjustments that internal processes make require an organism to act–especially change its relationship to its environment–we can observe the external signs of the internal processes: behavior.   Here the interface between the inner world of the organism and its outer world.

ETHOLOGY, The INTEGRATIVE BIOLOGY of BEHAVIOR is most fully understood from the perspectives of four broad areas (as biologists study them): DEVELOPMENT, ECOLOGY, EVOLUTION, and PHYSIOLOGY and how they are brought to bear on BEHAVIOR (“DEEP ETHOLOGY”)

(an aside about TRAITS:  The organism possesses millions of traits, hierarchically organized and more-or-less interconnected within and between hierarchical levels.  Physiology, unlike descriptive morphology or cytology represents DYNAMIC traits.  They are the “manifest processes that sustain the health of an organism.”  We can typically take only a snapshot of a process although technology in recent decades has enabled multiple high-speed snapshots (movies, videos).  So it is always more-or-less of a fragment of the processes.  That may seem sufficient for an immediate question, but future questions will require more accuracy and precision.   This dynamism: always in flux or at least poised for rapid action is the essence of  the organism itself, but is is something we cannot yet capture.  See the DEEP ETHOLOGY GLOSSARY entry for TRAITS