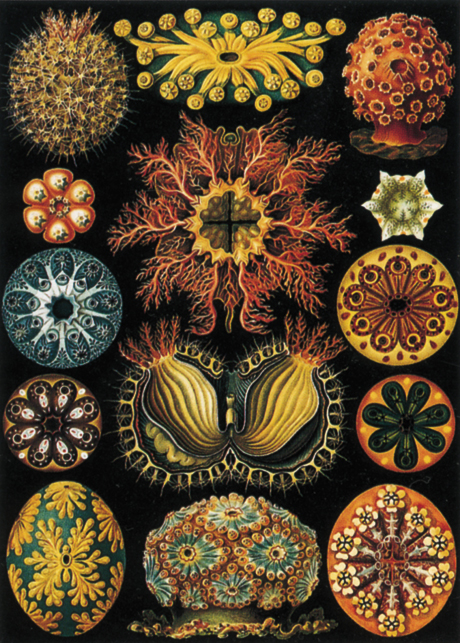 BIOMORPHIC ART … generally refers to elements in art inspired by natural, organic forms (e.g., Wikipedia) and look at the notes from a show on surrealism at the Israel Museum in Jerusalem

Much of this is about artists (“The antennae of the race,” as Ezra Pound put it) and how they picked up on natural imagery that was previously unnoticed or ignored or even rejected (sometimes because it was so remote from the “ideal perfection” of mathematics)

BUT a scientist that deliberately sought to share his personal aesthetic vision is the 19th century biologist, ERNST HAECKEL (Art Forms in Nature).

And an architect that incorporated elements of nature that stood out for him at an entirely different level of organization–the structural–was ANTONIO GAUDI (Basílica de la Sagrada Familia) .

Haeckel’s influence as a scientist and as an artist  (see newworldencyclopedia.org/entry/) 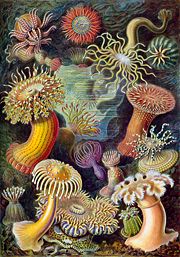 An illustration of sea anemones from Kunstformen der Natur.

“Kunstformen der Natur (Art Forms of Nature) is Haeckel’s book of lithographic and autotype prints. Originally published in sets of ten between 1899 and 1904, and as a complete volume in 1904, it consists of 100 prints of various organisms, many of which were first described by Haeckel himself. Over the course of his career, over 1000 engravings were produced based on Haeckel’s sketches and watercolors; many of the best of these were chosen for Kunstformen der Natur, translated from sketch to print by lithographer Adolf Giltsch (Breidbach 2006).

According to Haeckel scholar Olaf Breidbach (2006), the work was “not just a book of illustrations but also the summation of his view of the world.” The overriding themes of the Kunstformen plates are symmetry and organization, central aspects of Haeckel’s monism. The subjects were selected to embody organization, from the scale patterns of boxfishes to the spirals of ammonites to the perfect symmetries of jellies and microorganisms, while images composing each plate are arranged for maximum visual impact (Breidbach 2006). 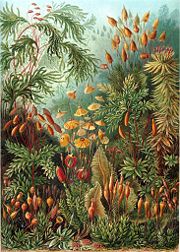 Among the notable prints are numerous radiolarians, which Haeckel helped to popularize among amateur microscopists; at least one example is found in almost every set of 10.

Kunstformen der Natur played a role in the development of early twentieth century art, architecture, and design, bridging the gap between science and art. In particular, many artists associated with the Art Nouveau movement were influenced by Haeckel’s images, including René Binet, Karl Blossfeldt, Hans Christiansen, and Émile Gallé. One prominent example is the Amsterdam Commodities Exchange designed by Hendrik Petrus Berlage, which was in part inspired by Kunstformen illustrations (Breidbach 2006).”

If certain of Haeckel’s colleagues were dubious, the public was not. Weltratsel (The Riddle of the Universe), first issued in 1895, sold more than half a million copies in Germany alone, an unheard-of number for the time, and was translated into thirty languages. Kunstformen der Natur, or Art Forms in Nature published in installments between 1899 and 1904, has arguably enjoyed an even broader audience. Its lavish images of self-enlacing, baroque jellyfish, with their translucent baldachins of tendrils, and his constellations of plankton magnified to Romanesque filigrees,1 directly influenced the more self-consciously decorative, asymmetrical vocabulary of Art Nouveau and Jugendstil—René Binet’s cast iron entrance gate to the 1900 Paris Exposition, for example, was modeled on Haeckel’s beloved radiolarians.2 Art Forms was eagerly perused by the Surrealists, notably Max Ernst, and almost certainly by the Bauhaus painters Klee and Kandinsky. Thus, even contemporary artists who have never seen the book can hardly have avoided the pulsations of its influence.3 But, about this, more later.

Plate 85 of Art Forms in Nature.

“From his professorship in Jena, the university town that was associated with the immortal polymaths Goethe, Schiller, and Hegel, Haeckel advocated Darwinism to a hostile world, declaring war on the medieval mystifications of religion and unleashing a barrage of invective at the Catholic Church. In contrast to Darwin and most of his fellow evolutionists, though, he did not confine himself to the role of sober secular materialist. His almost mystical obsession with a rational and progressive march toward biological perfection was far removed from the random impersonality of natural selection, and his contempt for religion did not stop him from establishing one of his own. As his theories developed, he began to attack not only anti-scientific ritualism, but dualism in general. Evolution proved that man and nature were not separable, and thus neither were matter and mind. “Crystal souls”4 inhered in the very minerals we were made of, human intellect being simply their higher expression achieved by means of the evolutionary drama. Accordingly, there was no need to project the existence of a creator outside the physical world: spirit lay within. In 1906, Haeckel founded a progressive church based on this quasi-scientific pantheism, calling it the Monist League in opposition to the dualistic religions. The Judeo-Christian ancestry was no more than a living fossil that could now be left behind.”  ….

“Posthumous association with the methodical madness of the Nazis has cast a retrospective pall over Haeckel’s undeniable achievements in microbiological taxonomy; his grander evolutionary theories have been debunked. Nevertheless, Art Forms in Nature continues to inspire and provoke the artists who, like Ernst or Kandinsky before them, stumble upon its gorgeously elaborated plates.”   (read Brody’s entire article)