MIS en ABYME (mise en abîme) and RECURSION as a METAPHOR in NEUROLOGY and CONSCIOUSNESS STUDIES: 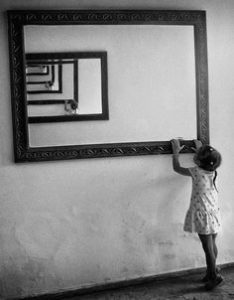 A hall of mirrors in which one’s reflection seems to go on forever.

·         “When Archimedes shouted Eureka, “I have found it”, he was experiencing self-consciousness of creativity. Understanding this phenomenon is the ultimate challenge for cognitive science, because it requires simultaneous solution of three of its major problems: the nature of the self, consciousness, and creativity. All three problems may have the same solution based on three fundamental computational mechanisms: neural representation, recursive binding, and interactive competition.” —summary of presentation 9/20/2013 (“Eureka! How Creative Intuition Results from Three Brain Mechanisms”) by  Dr. Thagars is Professor of Philosophy and Director of the Cognitive Science program at the University of Waterloo.

To these I have to add: in processing of data fields: interpolation (“filling in”) and    extrapolation (“extending out”)