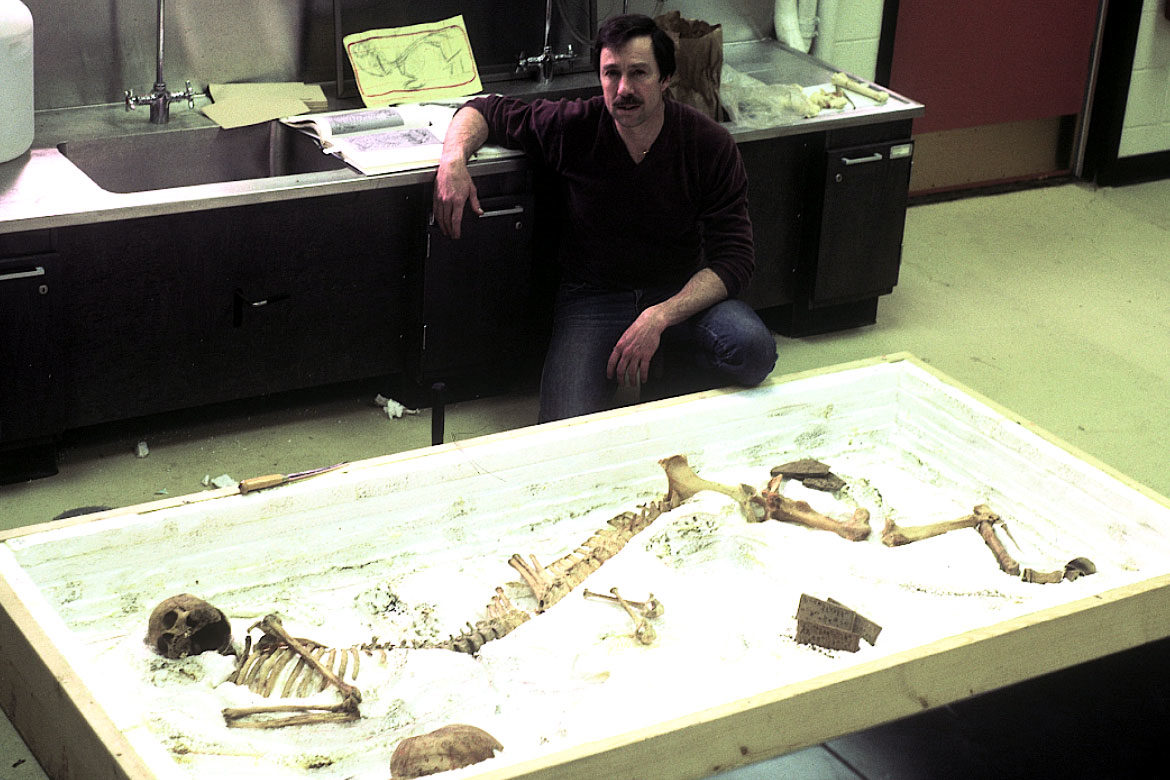 DO YOU BELIEVE IN CENTAURS?*

Mythical creatures have continually been the subject of human fascination.

And UT has its own unique piece of mythological history in the John C. Hodges Library—the bones of an adult male centaur. 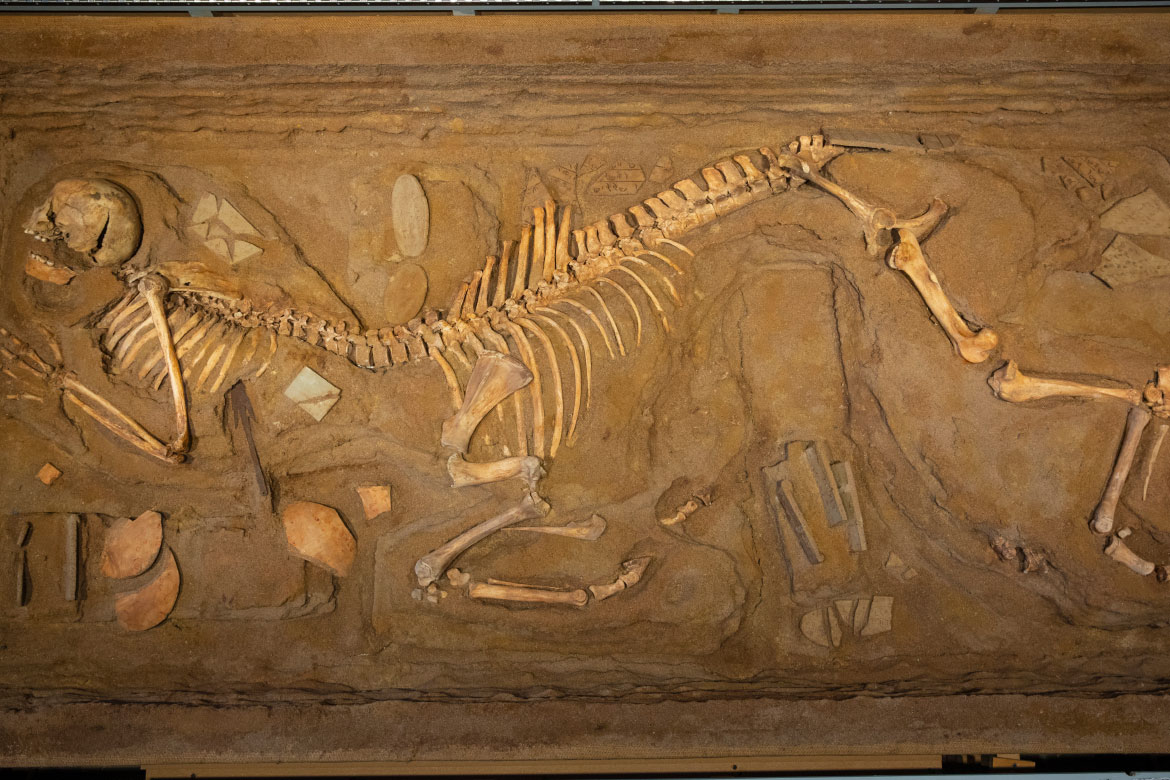 May marked the 25th anniversary of the installation “The Centaur Excavation at Volos,” which continues to present interested passersby with the same simple question: “Do you believe in centaurs?”

“The centaur has become a standard part of campus tours,” said Beauvais Lyons, Chancellor’s Professor in the School of Art, who, along with Neil Greenberg, helped bring the specimen to UT in 1994.

“Tour guides often use the display to weave their own tales about the origin and excavation of this specimen. It may be the first object lesson that students experience when it comes to the pranks that are so common to college life,” says Lyons.

And, ultimately, that is what the display is: a clever prank.

The centaur specimen, made from the tea-stained bones of a pony and a deteriorating human skeleton, was constructed by Bill Willers, a professor of biology at the University of Wisconsin Oshkosh. It was brought to UT in 1994 by Lyons and Greenberg, professor emeritus in the Department of Ecology and Evolutionary Biology. Lyons, self-appointed director of the Hokes Archives and for several semesters an instructor for a First-Year Studies course on pranks, designed the showcase and exhibition text. Bob Cothran, professor emeritus of theatre, painted the fake marble and wood end-panels. Clarence Brown Theatre master carpenter Marty Cooke was commissioned to build the display case.

Few know the centaur’s two-and-a-half-decade history of engaging students better than Greenberg, who teaches an annual spring interdisciplinary seminar, Art and Organism, which uses the centaur to discuss literal versus psychological truths of mythology.

“The centaur is our mascot,” Greenberg says. “It is often the catalyst for one of my favorite questions: ‘Is anything truer than truth?’”

For Greenberg, one provocative answer is mythology.

“This response typically sparks spirited discussions about art, science, and the nature of belief,” he says. “Every year I teach my seminar, I’m delighted by the rich diversity of creative ideas students in majors from biomedical engineering to business, food science to finance, microbiology to music, bring to the discussion.” 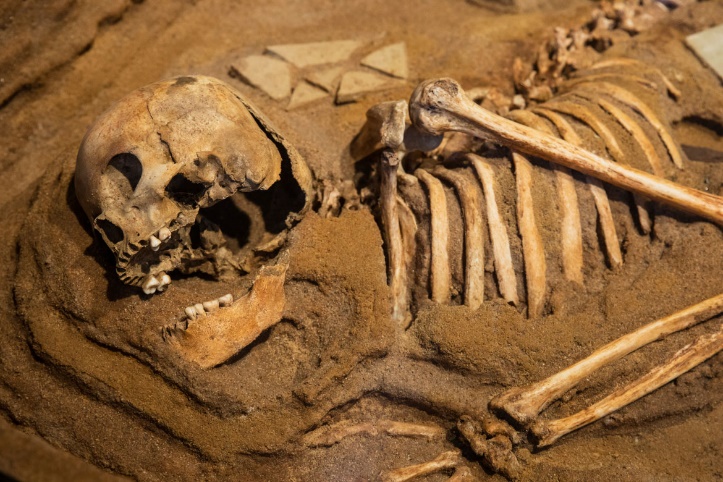 But why all of this fascination?

To Lyons, mythical creatures from Bigfoot to dragons fulfill a basic human need to express the unconscious through symbols and metaphors.

“From this perspective, the ancient Greek myth of the centaur—a half-human, half-horse creature that inhabited the forests of Thessaly—represents a potent combination of human intelligence and animal desires,” Lyons says. “The centaur becomes even more loaded when it is presented as a scientific fact.”

The public fascination with the centaur exhibit hasn’t been limited to the university. The display has been written about by scholars, journalists, and bloggers in the United States as well as abroad. It has appeared in stories in USA Today and on the Roadside America and Mental Floss websites. Adrienne Mayor, a research scholar in Stanford University’s classics department and author of The First Fossil Hunters: Paleontology in Greek and Roman Times, has said the specimen allows observers to experience “something like the awe felt by ancient Greeks and Romans when they listened to tales of Hercules battling centaurs and marveled at realistic sculptures and vivid vase paintings of centaurs galloping across the landscape. . . . The Centaur of Volos embodies the point where mythic imagination and scientific curiosity converge.”

In order to ensure that the centaur continues to hold its special place as a site for campus-wide curiosity, new track lights were recently installed thanks to private gifts. Along with the display’s faux-marble base and the illusionistic wood end-panels—built to match their surroundings in the Jack E. Reese Galleria—the lights emphasize a point both Lyons and Greenberg hope is clear: the centaur will continue to hold its place as one of UT’s most significant works of public art for years to come.

“Every time we pass it, ‘The Centaur Excavation at Volos’ reminds us to be skeptical,” Lyons says. “Just because something has the trappings of authenticity doesn’t make it true.”