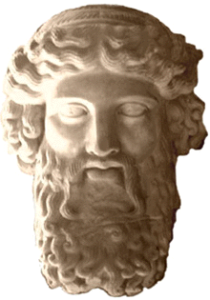 “…Gorgias proclaims that even if existence could be apprehended, “it would be incapable of being conveyed to another” (B3.83). This is because what we reveal to another is not an external substance, but is merely logos (from the Greek verb lego, “to say”–see below). Logos is not “substances and existing things” (B3.84). External reality becomes the revealer of logos (B3.85); while we can know  logos, we cannot apprehend things directly. The color white, for instance, goes from a property of a thing, to a mental representation, and the representation is different than the thing itself…”

This argument has led some to label Gorgias as either an ontological skeptic or a nihilist (one who believes nothing exists, or that the world is incomprehensible, and that the concept of truth is fictitious). But it can also be interpreted as an assertion that it is logos and logos alone which is the proper object of our inquiries, since it is the only thing we can really know. On Nature is sometimes seen as a refutation of pre-Socratic essentialist philosophy.   (Bruce McComiskey, cited by C. Francis Higgins, on “Gorgias” in the Internet Encyclopedia of Philosophy)

“WORDS” are important to us, but the Greek sense of word emerged in John 1:1:  En archē ēn ho Lógos and has infused thinking about words (and reason or logic or order) with special urgency and special poignancy when contrasted with what preceded:  chaos in some views, passion in others.

BUT we also know (as noted above) that words are not things: they are representations of more-or-less validity–accuracy and precision in representation.   Words are “fossil poetry” (Emerson) and like other art forms, “the lie we use to tell the truth” (Picasso)