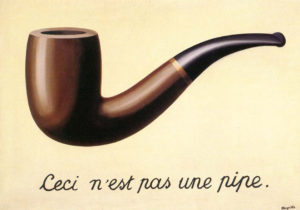 “Surrealism is sheer psychological automatism, by means of which it is intended to express verbally, in writing or in some other way, the actual function of thinking, without control exercised by reason, outside any aesthetic or morel prejudice.”  (Breton, 1924  — from Schmeller, Surrealism p.8.[i]

The surrealists were deeply influenced by Freud’s insights about the purity of dreams compared to how contaminated they become as remembered through the lenses of cultural and social biases.   Thus dreams before processing by the socialized mind were true, precultural thoughts, and that is what they wanted to represent.  As peculiar and distorted as their art may seem to our cultured eyes (and ears), it was thought to be a more genuine expression of the contents of mind.

[i].  Breton,  Andre. 1924.  The Surrealist Manifesto of 1924.   “Imagination alone tells me what can be.”  Cited by Herbert Marcuse (Eros and Civilization, 1955).   A key theme in Robert Kennedy’s 1968 presidential campaign were these lines by George Bernard Shaw:  “You see things; and you say `Why?` But I dream things that never were; and say `Why not?`” (spoken by the Serpent in Eden in Back to Methuselah.)