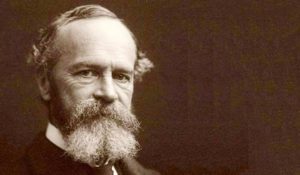 As the brain changes are continuous, so do all these consciousnesses melt into

Properly they are but one protracted consciousness, one unbroken stream.

In his lectures circa 1838–1839 Sir William Hamilton, 9th Baronet described “thought” as “a series of acts indissolubly connected” … and he proposed a “Law of Thought” he walled the “law of reason and consequent”  (Wikipedia).   “The logical significance of the law of Reason and Consequent lies in this, – That in virtue of it, thought is constituted into a series of acts all indissolubly connected; each necessarily inferring the other” (Hamilton 1860:61-62).[9]

“Consciousness, then, does not appear to itself chopped up in bits. Such words as ‘chain’ or ‘train’ do not describe it fitly as it presents itself in the first instance. It is nothing jointed; it flows. A ‘river’ or a ‘stream’ are the metaphors by which it is most naturally described. In talking of it hereafter let us call it the stream of thought, of consciousness, or of subjective life. (James 1890:239)

He was enormously skeptical about using introspection as a technique to understand the stream of consciousness. “The attempt at introspective analysis in these cases is in fact like seizing a spinning top to catch its motion, or trying to turn up the gas quickly enough to see how the darkness looks.”[note]

Bernard Baars has developed Global Workspace Theory[14] which bears some resemblance to stream of consciousness.

Stream of consciousness  can be a narrative  device that attempts to give the written equivalent of the character’s thought processes,  Let this idea flourish in an unexpected area: read about the “Follow the Brush” (zuihitsu) literature, –Click on “The Timeless Wisdom of Kenko – Morrow 2011))