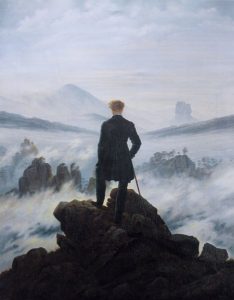 Caspar David Friedrich “Wanderer above the Sea of Fog” (1818)

BEAUTY, TERROR, AWE: notes for considering the sublime in life and art

“In 1688, literary critic John Dennis took a Grand Tour of Europe, as was de rigueur for gentlemen of his station. During his passage of the Alps, he wrote that he experienced “a delightful Horrour, a terrible Joy and at the same time that I was infinitely pleased, I trembled”. A term used in transcendent literature seemed appropriate: such experiences were “sublime”.

The sublime caught on, with other adventurers extolling the terrible beauty of the wilderness. In 1757, the philosopher Edmund Burke defined it as an aesthetic category distinct from beauty, and it became a potent concept in 19th-century Romantic literature and art, in part as a reaction to early industrialisation.”  (Paul-Choudhury 2016)[2]

Sublime, “In aesthetics, the quality of greatness, whether physical, moral, intellectual, metaphysical, aesthetic, spiritual, or artistic. The term especially refers to a greatness beyond all possibility of calculation, measurement, or imitation.” (Wikipedia) BUT there’s a unique quality: the sublime is beautiful (because?) it is terrifying (Kant 1764), overpowering (Schopenhauer 1818), or numinous (Otto 1917)[3]

Awe, is an element of the sublime (Edmund Burke), a feeling that accompanies a sense of an enormity that transcends human capacity for conceptualizing.  Dacher Keltner and Jonathan Haidt have argued that awe, however evoked, has evolved because of its capacity to “bind us to social collectives and enable us to act in more collaborative ways that enable strong groups, thus improving our odds for survival.” (Keltner & Haidt 2003).

“DEEP ETHOLOGY” has become the disciplinary scaffold we use to explore shared ideas and feelings. But “DEEP” has other connotations:  Read an excerpt from Emerson on circles.

“In a review of the theoretical literature on awe, Keltner and Haidt (2003) proposed that awe-eliciting stimuli are characterised by two features: perceptual vastness and need for accommodation. Although the term ‘‘vastness’’ implies great physical size, in this usage ‘‘vast’’ describes any stimulus that challenges one’s accustomed frame of reference in some dimension. … What is critical is that the stimulus dramatically expands the observer’s usual frame of reference in some dimension or domain.” (from Shiota et al 2007).

Awe is generally positive and a feeling actively sought, suggesting that the pursuit or its success involves personal happiness.

Interestingly, awe and happiness are associated with different contexts.  Shiota (et al 2007) compared awe to happiness and found that AWE is relatively asocial compared to HAPPINESS. “As expected, awe was elicited by information-rich stimuli, particularly panoramic nature views and novel art and music, and reliving awe experiences made participants want to be in such environments again. Happiness was experienced in overwhelmingly social contexts, and was three times as likely to involve smiling*a social display.”

Browse the rich & multifaceted “A Philosophical Inquiry into the Origin of Our Ideas of The Sublime and Beautiful With Several Other Additions”  by Edmund Burke (1756)  (Harvard Classics, Vol. 24, Part 2)  online via Bartelby 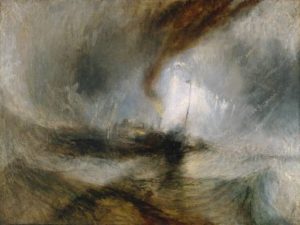 Edmund Burke’s Philosophical Enquiry (1757) connected the sublime with experiences of awe, terror and danger. Burke saw nature as the most sublime object, capable of generating the strongest sensations in its beholders. This Romantic conception of the sublime proved influential for several generations of artists.

In this section essays explore how artists responded to the sublime in the late eighteenth and early nineteenth centuries, with articles on shipwreck and psychiatry, and case studies on the work of Stubbs, Haydon and Constable.

RESOURCES (Essays from the Tate) – come at this phenomenon, arguably a peak experience in a human life, from as many directions as possible.   Search for the right combination of words amongst the thousand you might read her that can at least begin to evoke insight.

In 1791, when William Wordsworth was 21, he undertook a night ascent of Snowdon, a mountain in North Wales.  Philip Shaw[4] writes:  “Following an arduous journey to the summit the poet sees a flash of light which reveals ‘a huge sea of mist […] as far as sight’ can reach (line 51). From ‘a fracture in the vapour’ he hears ‘the roar of waters, torrents, streams / Innumerable, roaring with one voice’ (lines 59-60).

A meditation rose on me that night
Upon the lonely mountain when the scene
Had passed away, and it appeared to me
The perfect image of a mighty mind,
Of one that feeds upon infinity,
That is exalted by an under-presence,
The sense of God, or whatso’er is dim
Or vast in its own being …

Later that night, Wordsworth reflects on his experience. The means by which ‘Nature’ transforms the mist into an ‘ocean’ (line 44), a vision of grandeur effacing the majesty of the ‘real sea’ (line 47), resembles the creative power of the imagination: that ‘glorious faculty / Which higher minds bear with them as their own’ (lines 89-90). Mind and nature, that is, are united in their ability to ‘mould’, ‘abstract’ and ‘combine’ the ‘outward face of things’ into images ‘awful and sublime’ (74-9; passim).” (Philip Shaw) (see more at: https://www.bl.uk/romantics-and-victorians/articles/wordsworth-and-the-sublime#sthash.3dKdNG2M.dpuf AND SEE Wordsworth’s experience (1805)

Reflecting on experience ?  SUBLIME.  FREE ASSOCITION: A poignant but powerful expression of the mixed message of the aesthetic sublime:

Whoah and I know a man, he came from my hometown

He wore his passion for his woman like a thorny crown

He said Dolores, I live in fear

My love for you’s so overpowering, I’m afraid that I will disappear

You know the nearer your destination, the more you slip sliding away

“Today’s visitors to Svalbard, Europe’s largest wilderness, might also be in search of the sublime, knowingly or otherwise. But the experience is not the same as it was for earlier adventurers. Gaze at the Arctic ice, and you become uneasily aware that it is vanishing, even if you can’t see that directly – and that your own presence is contributing to its thaw.” …  “Climate change – its impact, complexity and persistence – is hard for human brains to parse. In his 2013 book Hyperobjects, the philosopher Timothy Morton described how “things that are massively distributed in time and space relative to humans” defy our intuition. Global warming is one such hyperobject: a panel about the ocean hinted at others.” … “Presenting this in a way that doesn’t simply induce despair is tough. Part of the problem is that we are used to durability being of a piece with artisanry and scarcity. Our aesthetics are off: we don’t readily grasp that cheap, mass-produced junk will circle the globe and last almost forever.” … “In an age where old certainties are collapsing, we need to find values and aesthetics more fitting for the times – or to renew old ones. Perhaps it’s time the sublime made a comeback. But if it does, it will have to include not just the horrors and joys of nature – but of humanity too.”  (Excerpts from the article that appeared in print under the headline “The terrifying faceof a new sublime”)

[3] “Kant, in 1764, made an attempt to record his thoughts on the observing subject’s mental state in Observations on the Feeling of the Beautiful and Sublime. He held that the sublime was of three kinds: the noble, the splendid, and the terrifying. … To clarify the concept of the feeling of the sublime, Schopenhauer listed examples of its transition from the beautiful to the most sublime. This can be found in the first volume of his The World as Will and Representation, § 39. For him, the feeling of the beautiful is in seeing an object that invites the observer to transcend individuality, and simply observe the idea underlying the object. The feeling of the sublime, however, is when the object does not invite such contemplation but instead is an overpowering or vast malignant object of great magnitude, one that could destroy the observer. … Rudolf Otto compared the sublime with his newly coined concept of the numinous. The numinous comprises terror, Tremendum, but also a strange fascination, Fascinans