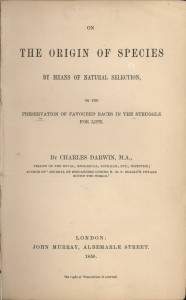 “It is interesting to contemplate an entangled bank, clothed with many plants of many kinds, with birds singing on the bushes, with various insects flitting about, and with worms crawling through the damp earth, and to reflect that these elaborately constructed forms, so different from each other, and dependent on each other in so complex a manner, have all been produced by laws acting around us. … There is grandeur in this view of life, with its several powers, having been originally breathed into a few forms or into one; and that, whilst this planet has gone cycling on according to the fixed law of gravity, from so simple a beginning endless forms most beautiful and most wonderful have been, and are being, evolved.”

AT another level and in a much less tangled ecology,

research in molecular evolution shows that there is…

No escape from the tangled bank

“… biologist Richard Lenski founded 12 identical populations of the fast-growing bacterium Escherichia coli. His ongoing long-term evolution experiment (LTEE) is designed to study adaptation to a constant laboratory environment, removing as many complexities and confounders as possible. Every day, each of the 12 populations is transferred to a fresh flask of nutrients to enable continued cell growth and division. Samples from these populations are periodically frozen, to preserve a ‘fossil record’ for retrospective analysis.

This reductionist approach has been richly rewarding. The LTEE has produced striking discoveries, including markedly elevated mutation rates in some of the formerly identical populations, and the evolution of a radical metabolic trait in another population ref. The frozen fossil record has allowed researchers to resurrect ancestral strains, replaying the tape of life to tease apart the molecular causes of these striking phenomena.

Evolution in Lenski’s experiment is complex enough to yield surprises, but simple enough to be comprehensible. So far, researchers have approached the LTEE much as natural historians might — by identifying examples of remarkable phenomena and digging deep to dissect their causes. But do these phenomena reflect the typical course of evolution in LTEE populations? To answer this question, Good et al. adopt a fresh approach to analysing LTEE samples: characterize what is typical, rather than catalogue what is remarkable. Their statistical approach shows that phenomena previously observed as single, remarkable examples actually occur with regularity.”   (Read on: Plotkin 2017)