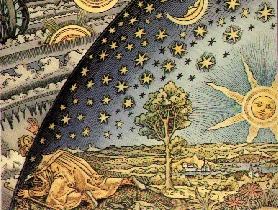 .This  personal collection of serendipitously encountered spiritual and religious wonders, curiosities, and tethers to communities of  like-minded  people began in the service of an open essay –“Science and the Spirit.” — But has subsequently taken on a life of its own.
Sites identified here range from illuminating and intrinsically fascinating through genuinely weird and amusing. Taken together they help circumnavigate the human concern for transcendence.  Be challenged and enlightened, inspired and enthused . . .
.
RESOURCES for the endless adventure:
(why it seem endless)
THE GREAT STORY “is a way of telling the history of everyone and everything that honors and embraces all religious traditions and creation stories. It is the sacred narrative of an evolving Universe of emergent complexity and breathtaking creativity and cooperation — a story that offers each of us the opportunity to find meaning and purpose in our lives and our time in history. . . . Science writer Connie Barlow points out . . . that The Great Story is distinguished from most other creation stories in four ways:
it is the story of the changing story. Whenever a new discovery is made in the sciences, this creation story changes. Change is to be welcomed; not feared.
it is a creation story that is not yet over. Evolutionary change at all levels (cosmos, planetary, life, culture) will continue into the future, and we humans bear a responsibility for how the story will continue on Earth.
it is a new creation story shaped with a planetary perspective. Because the scientific enterprise is now global in scope, this story necessarily has its origins and ongoing influences centered at the scale of the whole Earth — influenced by peoples of all ethnicities, all religious traditions, and hailing from all bioregions. (This is the unity character.)
it  is radically open to multiple interpretations. Because the empirical and theoretical sciences search entirely for material explanations of the world, whenever one ventures into the realm of meaning or into the realm of spirit, the interpretations necessarily go beyond the science. And yet, make meaning we must! Humans are intrinsically meaning-makers, whether we construe that meaning to be innate in the cosmos or created by the human mind. (This is the diversity character.)
it is the marriage of science and religion. Because the creation stories of classical religions and primary peoples were birthed well prior to the discoveries of an evolutionary universe, these stories can at best be reconciled with scientific awareness. In contrast, The Great Story grounds its celebratory creation story on the contributions of the scientific endeavor, and the interpretations are nuanced to be empowering for today’s concerns.
in 2002 Rev. Michael Dowd and Connie Barlow have taken to the road to tell the Great Story.  Their “website was launched . . . initially [to help them schedule] events for their life on the road, teaching in schools and colleges the wonders of cosmic and life evolution, and preaching in churches ways of regarding evolution such that diverse faiths and worldviews are enriched.”