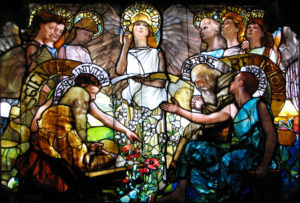 AS a biologist, I believe that the receptive and expressive capacities for aesthetic experience are expressions of biological needs.  They have evolved in our species and developed in us as individuals; they are profoundly subject to environmental influences and manifest through layers of physiological processes that have as their most urgent priority, the meeting of biological needs.

WE must navigate amidst the constraints/biases of our congenital dispositions as they locate themselves along spectrum of morphological and neuroplastic possibilities.  In other words, art occurs where the past and future intersect.  As a biologist, I am comfortable giving a significant role to the unknowable future because the organism has elaborate processes in play at every level of organization–from cellular to cognitive–to anticipate the consequences of action and to adjust ongoing actions to accommodate them. [see ERROR DETECTION].  I try to remain mindful of the deep threads of continuity between the generations that underlie these developmental possibilities and where they intersect.

PALEOPSYCHOLOGY:   History tells us much about the future: the likely paths future coping mechanisms might take spontaneously or with cultural “guidance.”  The constraints of history and how traits that evolved in the past can help us cope with unexpected exigencies of the future: what drove past species to extinction? What enabled some species to thrive while others failed?

TRAITS are more-or-less ADAPTIVE to the extent that they help an organism cope with selection pressure.

How is art adaptive?  Early ethological thinking (Conrad Lorenz) regarded ART as “autotelic” –existing for its own sake alone, but in fact its adaptive value has been documented in diverse ways.  Theory has it that all traits–not least art–must be now be (or in the past have been)  adaptive: fitness-enhancing.  They “must” confer a service to either individual or group needs or be necessarily related to some other trait that confers such a service.  It must meet proximate or ultimate needs–and indeed it does.  It is a good bet that even traits that provide no apparent advantage may have had such an advantage in some ancestral “environment of evolutionary adaptedness” (EEA) .   In other words ART meets NEEDS, past, present, and/or future (anticipated).

REVIEW NEED as first laid out by humanist psychology: 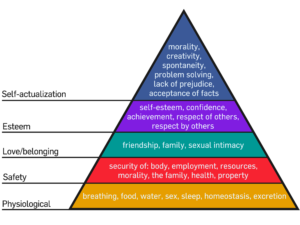 Self-Actualization is arguably the supreme need, serving the perpetuation of the species with an emphasis of one’s own attributes.   Often it trumps other needs … self-sacrifice for family and kin … a dramatic example is found in matriphagy.

OTHER NEEDS: The NEED-TO-KNOW

In some versions of the taxonomy, self actualization is, or leads to, TRANSCENDENCE. (interestingly, “going beyond” is often defined as a necessary dimension of art: going beyond the necessity of the moment, the basic meeting of a biological need.  BUT also, we might consider if the mere effort to “go beyond” is in itself an adaptive trait, signaling (for example) certain qualities of disposition or temperament, or even the possession of the necessary leisure)

NEEDS MET BY the EXPERIENCES of ART: creating, considering, communicating.   We fruitfully build on a list of the functions that art might serve that  might lead to its natural selection as a human trait compiled by Ellen Dissanayake (Read “What is Art For?”).

Other clues about needs met by art emerge when creative or experienced (expressive or receptive) art articulates with remedial therapeutics and medicine, sometimes made evident only the occurrence of rare syndromes (some aphasias) or the consequences of unfortunate physiological events (strokes, (more), epilepsy) or uncommon genetic dispositions (autism, schizophrenia)

WAYS to think about these NEEDS

About the need for intention for example, Kathryn Coe (1992)[i] … feels that art must be defined in an explicit, empirical way and purged of appeals to affect, technique, or symbolism is essential to cross-cultural analyses.  She ventures and defends a definition: “Color and or form used by humans in order to modify an object, body, or message solely to attract attention to that object, body, or message.”

This recalls Ellen Dissanayake’s view that “ART” means “making special” by going beyond the immediate needs of the moment  (implying the availability of both safety and leisure) (see above).  It utilizes the artist’s (or artisan’s) explicit or implicit (intuitive) understanding of the actions that call selective attention to an act or object … in her’s terms, it “makes special” the act or artifact to themselves or (more particularly) to another person.

Coe asserted that “The proximate or immediate effect of art is to [deliberately] make objects more noticeable” (1992:219) … and then try to use that idea to identify an evolutionary origin for the phenomenon.  For example, she regards modification of the appearance of the human body, first seen during the transition between the Middle and Upper Paleolithic periods, as the first solid evidence for art. Intentional modification of the human body (by 70,000 BP there was evidence … of intentional head binding; by upper Paleolithic there is evidence of intentional teeth filing in Minatogawa man from Okinawa (c. 18,000 BP); and by late upper Paleolithic, cranial and dental modification seemed more common and elaborate…  )

Coe’s definition requires intentionality. Speaking of the appearance of  an Acheulean handaxe of  Homo erectus  (200,000 BP), if the craftsman did not go beyond pure functionality it was not art: “Aesthetic ‘attractiveness’ thus may be an unintentional consequence of use, and hence not art” (p. 223).

WE can accept that art process or product (“artifact”) is no longer “autotelic” –that whether observing, integrating, or creating art, it has functions that serve the implicit or explicit needs of artists and/or their audience.

ART may be created as an unintended by-product of other acts if it is perceived by others as artistic in the sense that it goes beyond normal boundaries of expectation and calls selective attention to itself.   Creators of art may be acting as recreation or obsessive, they may have casual indifference (“She walks in beauty”–Byron) or be acutely aware of urgency (“The day came when the risk to remain tight in a bud was more painful than the risk it took to blossom.” attrib to Anaïs Nin;  “If you bring forth that which is within you, what you bring forth will save you.  If you do not bring forth that which is within you, what you do not bring forth will destroy you.+–Gospel of Thomas #70) .

Notes: Mind and the social contract.  After incoming sensations generate a characteristic transient pattern of cortical activity it may reappear in contexts of other knowledge and seems to represent the meaning of a particular sensation.  What we learn of the world is attributable to constant updates achieved this way.  Changing your mind.  “Mammalian brains contain a mechanism that can loosen the grip of previously acquired perspectives on the world and lay the groundwork for securing crucial new knowledge” (Walter J. Freeman (Berkeley) in Societies of Brains 1995, Earlbaum, reported by Bruce Bower 1996, “Bridging the Brain Gap”  in SN,  2 Nov 1996 pp. 280-281)

Existential connection: Bruce Bowers believes Freeman would endorse Sartre’s argument that “each of us constructs self through his or her own actions and that we know that self as it is revealed in our actions” (P.280).  (Recalling St. Thomas who believed that to attain our goals we must accommodate ourselves to the world) The psychologist James Gibson had a similar view that it is through our actions that we perceive meaning in the stimuli that surround us.   Freeman believes that brains are isolated self-organizing systems that are closed to meaning.

But sociality requires that the gap between isolated islands of mind  should be closed and Freeman believes that is what happens when the island minds have a reorganizing experience such as that experienced by voles when chemicals are released as part of the mating / birthing / child-rearing experience that stimulate parental behavior.  “Substances such as these may wipe away connections formed among neurons by experiences early in life and usher in a temporary period of cerebral malleability.   In humans, the  “meltdown of long-standing neuronal connections and their attendant attitudes and beliefs is frequently experienced as a frightening loss of identity and self control.. . ”   Witness, Pavlov and subsequent findings about  “brainwashing,” and the induction of brain states that are conducive to incorporating collective values.

ART–in its expression or its reception meets many biologically relevant NEEDS; arguably, the greatest need is KNOW ONE’S SELF.  There are adaptive advantages in striving for this goal as well as attaining it (in fact attaining perfect self-knowledge may not be possible –Another expression of the journey being more important than the destination) [more about the importance of being in motion]