“is there a NATURAL SELECTION for CONNECTIONS?”

“Brain plasticity, essential for learning and memory, is controlled by competition for a limited protein resource. (AsianScientist (Aug. 14, 2015)

– Both the formation and pruning of neuronal spines is controlled by competition for the protein catenin, according to a study published in Cell.

These findings provide a deeper mechanistic understanding of brain plasticity in action. By counting the number of neuronal spines and analyzing their shapes, scientists are able to estimate the total number of synapses within a neural circuit and the strength of these synapses.

Previous studies show that the number of spines rapidly increases in the early life, suggesting extensive formation of connections between neurons. However, during the transition through adolescence, spine numbers decrease significantly, suggesting that existing connections are pruned to refine the overall circuit.

This spine pruning process is believed to play a critical role in normal functioning of the brain, and spine pruning defects have been implicated in developmental neurological disorders including autism spectrum disorders and schizophrenia.

The molecular control underlying this process is poorly understood. Dr. Yu Xiang’s research group at the Institute of Neuroscience, Shanghai Institutes for Biological Sciences of Chinese Academy of Sciences used the barrel field of the mouse somatosensory cortex (S1BF), which receives sensory inputs from the whiskers, as a model system to study the molecular mechanism underlying spine pruning. They found that the spine pruning in this region is coordinated with spine maturation and bidirectionally regulated by sensory experience, i.e. both processes were accelerated by enriched sensory activity and blocked under whisker deprivation. Based on these observations, they hypothesized that neighboring spines compete for a certain limited molecular resource, with the winner surviving and maturing, at the expense of the loser being pruned. A unique protein complex, called the cadherin/catenin cell adhesion complex, caught the researcher’s attention. Cadherin/catenin complexes are located at synapses, directly surrounding presynaptic neural transmitter release sites and post-synaptic receptors. 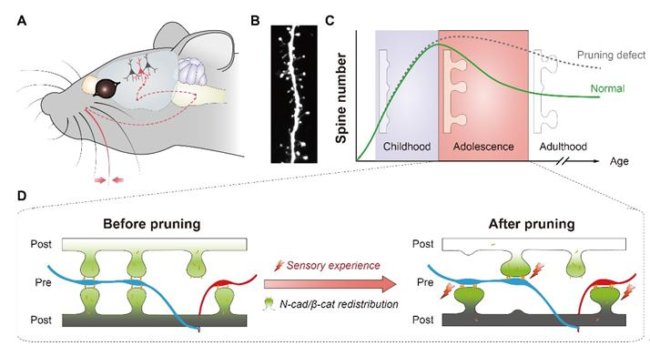 A mouse model of spine pruning.

In the process of neural circuit refinement during adolescence, the limited molecular resource of the cadherin/catenin complex plays a critical role.

These complexes stabilize dendritic spines by strengthening adhesion between them and their presynaptic counterparts, the axon termini. Yu’s group performed live imaging in cultured hippocampal neurons and found that locally enriching cadherin/catenin complexes on a single spine simultaneously induced the enlargement of the manipulated spine and the shrinkage/elimination of a neighboring spine. Similar spine fate differentiation can also be induced by activating a spine but not its neighbor using optogenetic methods, leading to the enlargement of the active spine at the expense of its neighbor.

The researchers found that fate differentiation depends on the redistribution of cadherin/catenin complexes between the two spines, the inter-spine distance and N-cadherin motility, but not on protein synthesis or degradation. The normal level of the cadherin/catenin complex inside a neuron is not enough to go around every spine, naturally forcing neighboring spines to compete for it. Those receiving stronger activity inputs are more likely to win the competition and grab more cadherins and catenins to form adhesion complexes.

Once the initial superiority is established, more and more cadherin/catenin molecules flow into the winner spine likely via positive feedback, and the loser spine keeps losing these molecules that are essential to its structure, a loss which inevitably leads to its collapse. Thus the loser spine is left no choice but to embrace the fate of being pruned in the end. The nervous system uses this mechanism of competition to ensure that more active neural circuits are retained and strengthened, and the less active ones pruned. The utilization of biological resources is optimized and neural circuits are refined.

This inter-spine competition mechanism based on the limited access of molecular resources echoes the basic principle of “use it or lose it” in neuroscience at the subcellular level. It expands our knowledge of neural circuit refinement and brain plasticity and represents a principal strategy employed by biological systems. (The article can be found at: Bian et al. (2015) Coordinated Spine Pruning and Maturation Mediated by Inter-Spine Competition for Cadherin/Catenin Complexes.) (Source: Chinese Academy of Sciences)

CONNECTIONS in the BRAIN: