. . . Alice laughed.  “There’s no use trying,: she said: “one can’t believe impossible things.”  “I daresay you haven’t had much practice,”  said the Queen.  “When I was your age, I always did it for half an hour a day.  Why sometimes I’ve believed as many as six impossible things before breakfast.”   (Lewis Carroll, Through the Looking-Glass,  ch.5)

“What if imagination and art are not frosting at all, but the fountainhead of human experience? What if our logic and science derive from art forms and are fundamentally dependent on them rather than art being merely a decoration for our work when science and logic have produced it?”  (Rollo May, Courage to Create)

Creativity defined. All definitions are fraught with problems.  The foremost problem is reconciling consensus and utility.  That is, the users of the term should agree on its meaning and the definition should hopefully keep the phenomenon defined open to growth.  In that spirit, a definition that helps make creativity accessible to scientific scrutiny is:  “Creativity involves both the process and product of unprecedented or novel perception, thoughts, or actions by which an organism or group of organisms copes with present or potential changes in the composition and structure of its environment.  It reflects a spontaneous or elicited intensity of cognitive processing that can relate and integrate variables not ordinarily associated with each other.  It is a potent biological adaptation in that it catalyzes or facilitates a regulatory or advantageous change in response to a real or perceived stress by an individual or group of individuals.”   Like all adaptive traits it seeks to preserve stability, the safe “status quo”and it results in an improved “fit”of an organism (or group) to its (their) environment and consequently higher fitness in terms of direct (personal) or  indirect (non- descendent kin) contribution to future generations.  Creativity makes CONNECTIONS.

Creativity enabled. A surprising link between imagination and memory

Creativity meets NEEDS. Creative perceptions, thoughts, or actions within individuals associate familiar or novel stimuli in varying combinations to serve that individual’s biological need.  Intrinsic reward systems operate to maintain this valuable activity.  When these perceptions, thoughts, or actions are communicated by example (modeling) or pedagogy (teaching) to serve social needs, the creative individual is identified and acknowledged.   (Greenberg 2004)

NEEDS MET.  Acts of creation and works of art may serve needs important for individuals to survive and prosper.  For example, by creating and experiencing art, one may gain access to otherwise inaccessible aspects of consciousness.  In addition, the act of creating art is an important exercise in the intercommunication of different levels of consciousness and their integration with motor skill.  Further, art can catalyze change, and art can heal.   MORE on NEEDS met by ART

CREATIVITY is arguably the human trait that has enabled our success as individuals and our successful proliferation as a species.  The more we describe and understand the DEEP ethology of creativity, the better we can remove impediments to its expression.  There are several descriptions, some of which have  been turned into cognitive technologies [more]

DEVELOPMENT of CREATIVITY:  “Baby talk then provides an unconscious aesthetic template after children have mastered verbal communication. “It could well be the reason we have emotional responses to temporal art, such as literature and music,” Miall says. If so, poetry and art may be interpreted as forms of social bonding that linger long after the initial mother-infant attachment is outgrown.” (“from Who’s a Little Bitty Artist? Yes, You Are!”  By Jocelyn Selim in DISCOVER Vol. 25 No. 05 | May 2004 | Mind & Brain [more]

Historically, “creativity” has not been “accessible” to scientific scrutiny because it was regarded as divinely inspired.  It was rude if not sacrilegious to inquire too closely or to demystify it.

What is needed is a

The capacity for creative acts –like all biological traits–  is more-or-less well developed in any individual or group and can be a potent biological adaptation in that it catalyzes or facilitates a regulatory or advantageous change in response to a real or perceived stress by an individual or group.  Like all adaptations it results in an improved “fit” of an organism (or group) to its (their) environment and consequently higher fitness in terms of direct or indirect contribution to future generations.

Creative perceptions, thoughts, or actions within individuals associate familiar or novel stimuli in varying combinations to serve that individual’s biological need.  Intrinsic reward systems operate to maintain this valuable activity.  When these perceptions, thoughts, or actions are communicated by example (modeling) or pedagogy (teaching) to serve social needs, the creative individual is identified and acknowledged. 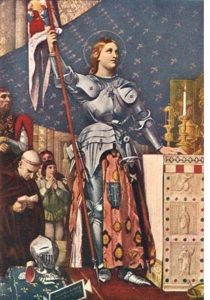 Robert:  How do you mean? Voices?

Joan:   I hear voices telling me what to do. They come from God.

Robert: They come from your imagination !

Joan: Of course. That is how the messages of God come to us.

INSPIRATION and IMAGINATION both have a surprising element of passivity (not unlike that seen in “spiritual experiences”).  Artists find this a common experience — as though too much thought intrudes upon the quality of the connection between cognition and noncognitive consciousness . . . the reservoir of memories and feelings to which consciousness does not ordinarily have easy access:  Artists “abandon themselves” to the process!  [more] [broken link]

The connections between creation and discovery are never clear-cut”,

Speaking of the SUBLIME, The British Library  steers into:  Wordsworths view bearing on Imagination and the divine

The poet’s failure to locate the sublime in nature is countered, however, by a rousing hymn to the imagination. In lines that affirm the superiority of mind over nature, Wordsworth writes of how imagination reveals the ‘invisible world’ where ‘greatness’ lives (line 536). ‘Our destiny, our nature, and our home’, he continues:

Is with infinitude, and only there;
With hope it is, hope that can never die,
Effort, and expectation, and desire,
And something evermore about to be.

At this point in the poem imagination, revealed as infinite in power and scope, appears triumphant over ‘the light of sense’ (line 534), a synonym for the time-bound world of nature. But this image of the mind’s transcendence of matter is matched by a terrifying sequence of lines in which the ‘blasts of waterfalls’, ‘thwarting winds’ and the noise of a ‘raving stream’ become ‘Characters of the great apocalypse, / The types and symbols of eternity, / Of first, and last, and midst, and without end’ (lines 558-72; passim). With echoes of the Book of Revelation and of Paradise Lost the mode of sublimity that wins out in these lines is not the sublimity of nature or of mind, but of God.” (from British Library site: https://www.bl.uk/romantics-and-victorians/articles/wordsworth-and-the-sublime )

The Existentialist’s view of Imagination:

Following these and other remarks, numerous commentators addressed the centrality of imagination in Sartre’s work.3 Yet, despite their different foci and perspectives of study, these and other interpretations present Sartre’s conception of imagination along similar lines, arguing that he understands imagining as an activity by means of which one breaks off from the real;4 an activity that opens a gap between consciousness and the world, such that it allows humans to “…nihilate the world – the domain of the perceptually given, the empirically real – in order to enter a realm in which an unhindered spontaneity becomes possible”.5 This line of thinking is loyal to Sartre’s insistence that human imagination epitomizes freedom. In allowing consciousness to withdraw from experience, imagination manifests “…the potential of consciousness to live and gain distance from the ensnaring presence of the perceptual world”.6 Imagination is understood as a negating force, able to annul reality and suspend our current, pragmatic engagements with it.

This interpretation in turn gave rise to a critique of Sartre’s theory of imagination. Paul Ricoeur famously argued that in emphasizing its negating features, Sartre neglects the productive dimensions of imagination, dimensions which are most manifest in the creation of fiction. In fiction, imagination does not simply suspend reality in favor of its mirror image, the absent object, but rather produces new meaning which is irreal.”7 (Lior Levy (2019) British Journal of Aesthetics, 59(2)

The problem that Jansen identified is the fact that “The concept of imagination is notoriously ambiguous. … Thus one must be cautious not to use ‘imagination’as a placeholder for diverse phenomena and processes that perhaps have not much more in common than that they are difficult to assign to some other, better defined domain, such as perception, conceptual thought, or artistic production. However, this challenge also comes with great opportunities: the fecundity and openness of ‘imagination’appeal to researchers from different disciplines with different approaches and …”   (see J Jansen’s “Phenomenology, imagination and interdisciplinary research” (in the  Handbook of phenomenology and cognitive science, 2010 – Springer; Related articles All 9 versions)