I met Robert Mowry when visiting the Sackler Museum at Harvard and he introduced me to these objects as they were being set up for exhibit.  He wrote the catalog/book on the exhibit  at the Sackler and later, as a senior advisor to Christies Auction House, he wrote a collector’s guide for a large auction held in 2015.  (see the Collecting-Guide-Scholars-Rocks).

(The text below may not include all illustrations: for those please go to the Christies’ site and Mowry’s Collecting-Guide-Scholars-Rocks). 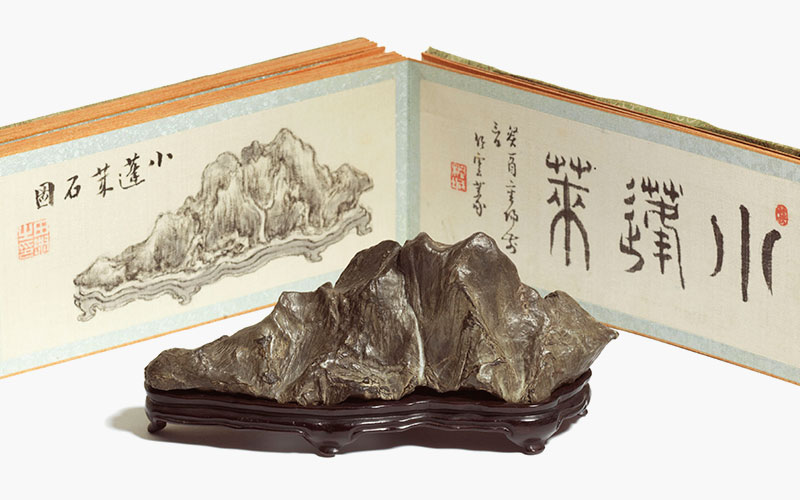 The fantastically-shaped stones that have inspired China’s poets and painters, as seen in December 2015 at Beyond White Clouds — Chinese Scholar’s Rocks from a Private Collection

What are scholars’ rocks?

Leading expert Robert D. Mowry, who is Harvard Art Museum’s Curator Emeritus and a senior consultant to Christie’s, describes them as ‘favoured stones that the Chinese literati displayed in the rarefied atmosphere of their studios’. The Chinese scholar drew inspiration from the natural world; he did not go out into nature to paint or compose poetry, explains Christie’s specialist Pola Antebi. Rather, he worked within the seclusion of his studio and used these ‘representations of mountains’ as inspiration for his work. 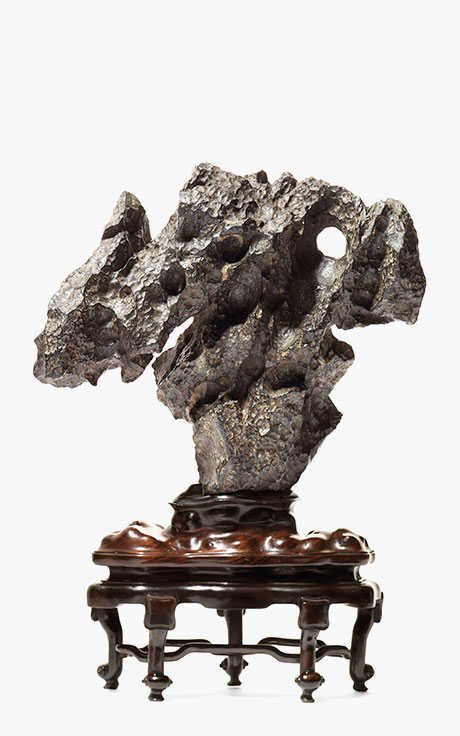 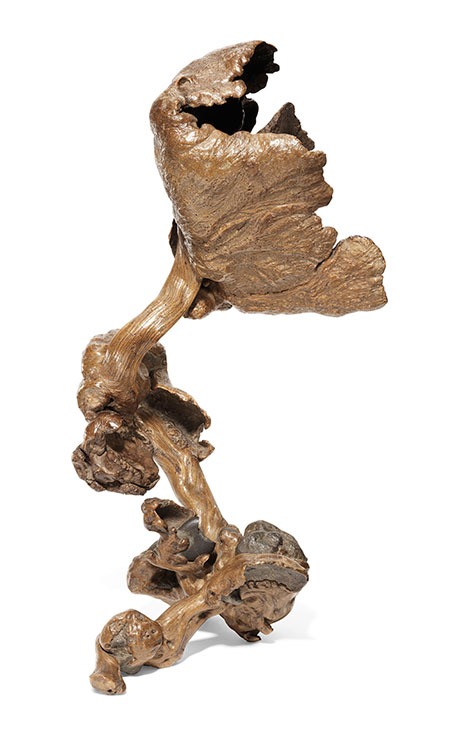 A Ying ‘soaring phoenix’ scholar’s rock. Qing dynasty. This piece was offered in Beyond White Clouds — Chinese Scholar’s Rocks from a Private Collection on 2 December 2015 at Christie’s in Hong Kong

A rare root-wood and stone lotus-form sculpture. Qing dynasty. This piece was offered in Beyond White Clouds — Chinese Scholar’s Rocks from a Private Collection on 2 December 2015 at Christie’s in Hong Kong

What do the various forms represent?

‘Like a landscape painting, the rock represented a microcosm of the universe on which the scholar could meditate within the confines of his studio or garden,’ says Robert D. Mowr., ‘Although most scholar’s rocks suggest mountain landscapes, these abstract forms may recall a variety of images to the viewer, such as dragons, phoenixes, blossoming plants and even human figures.’

A few of the mountainscapes may recall specific peaks but most represent imaginary mountains such as the isles of the immortals believed to rise in the eastern sea. However, more than anything it was the abstract qualities that appealed to the Chinese literati, an idea that resonates with the modern collector who will see parallels with the avant-garde forms of Brancusi, Moore and Giacometti. 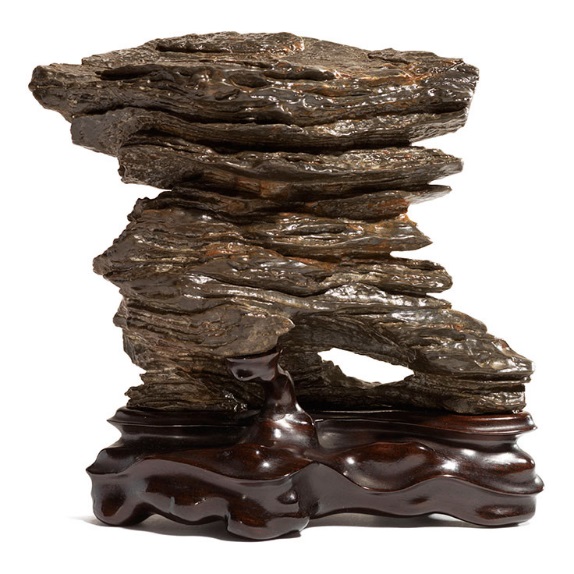 An inscribed Lingbi scholar’s rock. This piece was offered in Beyond White Clouds — Chinese Scholar’s Rocks from a Private Collection on 2 December 2015 at Christie’s in Hong Kong

Are they natural or man-made?

They were found in nature and on occasion enhanced by carving and piercing the stones, or making inscriptions.

Where were they found?

The rocks were often brought to the scholars from remote places, the finest coming from riverbeds or mountains. Some of the most prized examples came from Lingbi, in the northern Anhui provenance of China. ‘Because of their density, Lingbi stones are naturally resonant,’ Mowry explains. ‘The best Lingbi stones are deep black in colour; often only lightly textured, their surfaces appear moist and glossy.’

More common are the rocks originating from Yingde, in the Guangdong province. ‘Ying rocks are traditionally prized for their intricately textured surfaces which are often characterised as “dimpled” or “bubbled”,’ says Mowry. ‘At Yingde, rocks were harvested from caves; tradition asserts that the best pieces came from caves filled with water, which imparted dark, glossy surfaces.’ 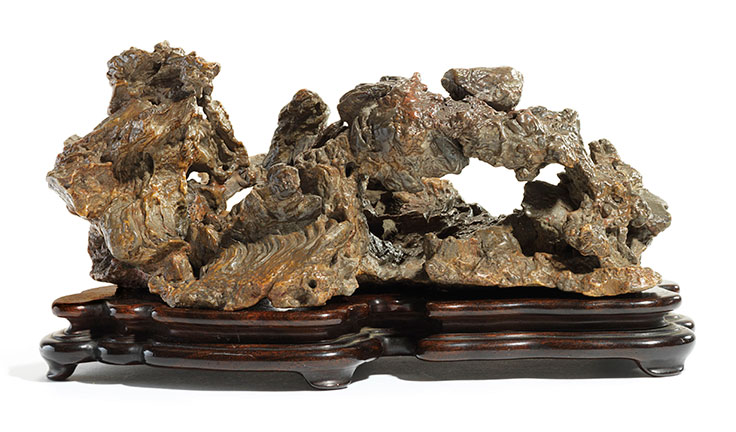 A Qilian ‘stream and grottoes’ stone. Qing dynasty. Sold for $1,120,000 in Beyond White Clouds — Chinese Scholar’s Rocks from a Private Collection on 2 December 2015 at Christie’s in Hong Kong

When were they first collected, and by whom?

From as early as the Neolithic period — nearly 7,000 years ago — prized stones and jade have been found buried in tombs. However it was not until the late Tang dynasty (618-907) that scholar’s rocks were collected in earnest.

In the Song dynasty (960-1279) we begin to see their influence on Chinese literature. ‘Mi Fu (1051-1107) and others composed essays on rocks,’ explains Christie’s specialist Pola Antebi, ‘and Du Wan (12th century) compiled the first comprehensive catalogue of stones, Yunlin shipu, attesting to the growing appreciation of fine stones.’

This fascination lasted for centuries and the breadth of the collection in this sale testifies to the rocks’ continuing appeal. ‘Collectors from all over the world find them appealing once they have been introduced to the category,’ confirms Antebi. ‘One prominent collector who helped introduce the category in the United States was the late Robert Rosenblum, an artist based in Boston.’ 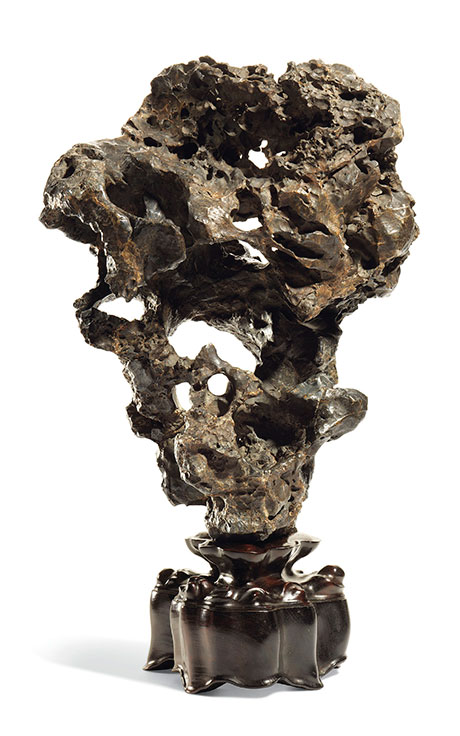 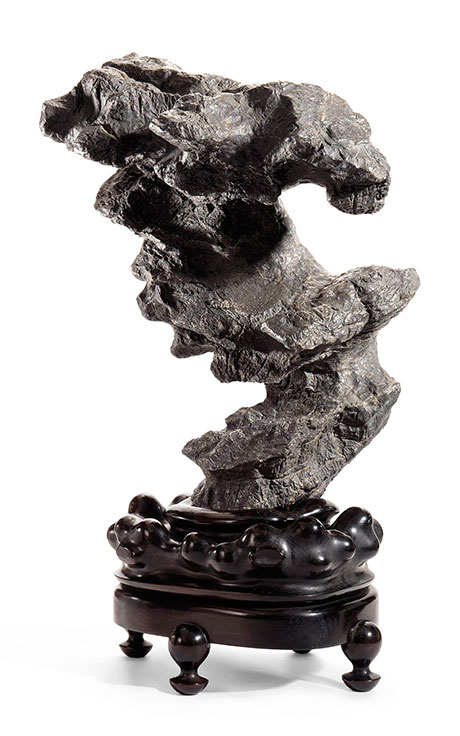 A ‘calico’ Lingbi scholar’s rock. Qing dynasty (1644-1911). This piece was offered in Beyond White Clouds — Chinese Scholar’s Rocks from a Private Collectionon 2 December 2015 at Christie’s in Hong Kong

An inscribed and dated Lingbi cloud-form scholar’s rock. Sold for HK$2,200,000 ($285,199) in Beyond White Clouds — Chinese Scholar’s Rocks from a Private Collection on 2 December 2015 at Christie’s in Hong Kong

What are the criteria for a scholar’s rock?

In his mid-19th century book Tanshi — or Chats on Rocks — Liang Jiutu stated that ‘in collecting, it is the choice of rocks that comes first. If the rock does not seem like a painting by the powers of nature, then you shouldn’t choose it.’

Many factors contribute to the perfect scholar’s rock — or ‘fantastic rocks’ as they were once known — ranging from its geographic origin to the colour and texture of the stone. ‘Rocks of sombre colour are typically appreciated for their sensuous shapes, while rocks of bright colour are generally valued for their massed forms, which best showcase their colours,’ says Antebi.

A number of terms were created to describe the desired qualities in a scholar’s rock, from shou (meaning thin) to tou (conveying ‘openess’). Hollows in the rock, meanwhile, were prized for their dramatic contrast to the solidity of the stone — and light. Other terms denote the rock’s age: gu means ancient but also elegant, while jue is the ultimate accolade, translating as ‘perfect’. 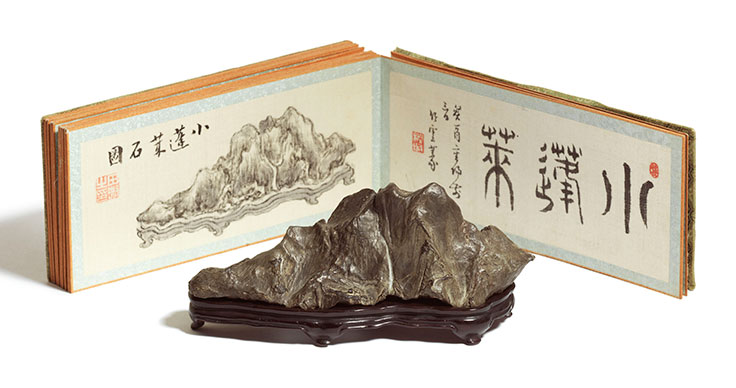 A small Japanese Furuyaishi rock mountain accompanied with a mounted album of commentaries by various connoisseurs. Japan, late Edo period. Sold for HK$300,000 ($38,891) in Beyond White Clouds – Chinese Scholar’s Rocks from a Private Collection on 2 December 2015 at Christie’s in Hong Kong

What do these pieces tell us about the cultural exchange between China and Japan?

‘This particular collection was primarily sourced in Japan,’ says Pola Antebi. ‘Many of these treasured pieces were acquired in China by Japanese dealers and transported back to Japan in the 19th century.

Robert D. Mowry elaborates on the differences between Chinese and Japanese taste when it came to the shapes of the rocks: ‘In creating paintings and in collecting rocks, the Japanese followed Chinese models in certain periods, while embracing native Japanese styles in others.’

There is a marked tendency for hollows and textured surfaces in Chinese rocks, while the Japanese prefer stones with a smoother surface, and tend to favour forms that suggest well-known peaks such as Mount Fuji. 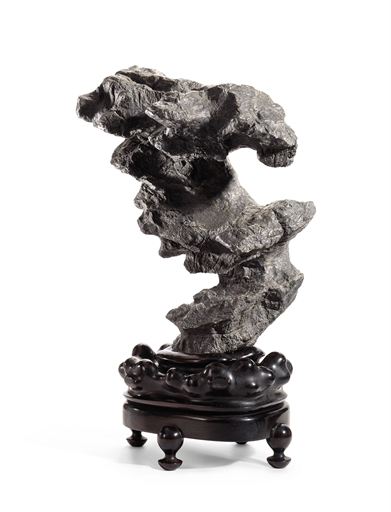 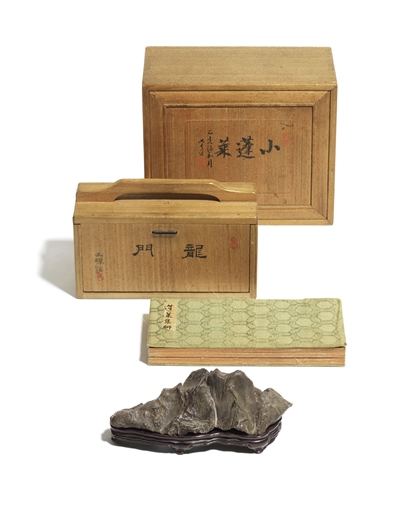