The fragility of you and what it says about consciousness

Some people see time, others feel like impostors. Their unusual brains have much to tell us about our sense of self, finds V.S. Ramachandran 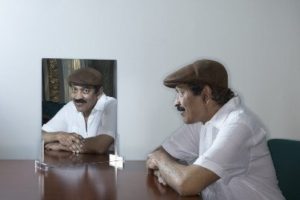 Mirrors can help unravel the nature of consciousness

IT’S the end of a long day of talks, and a gaggle of people are jostling around one of the final speakers. Everyone seems to have a question for V. S. Ramachandran, who is as close to a celebrity as a neuroscientist can get. Most want to know more about the curious brain conditions he has been discussing, but one woman has a more personal interest. Listening to his talk, she came to suspect that she has a very unusual brain.

Ramachandran has built a career on studying people with strange brains, and working out what they can tell us about what it means to be human. Perhaps his most famous work is on phantom limb syndrome – the sensation some people have that their missing limb is still present – but he has also studied synaesthesia, autistic savants and bizarre conditions like Cotard syndrome, in which people believe they are dead.

Today he has been talking about calendar synaesthesia, one of the most striking examples he has seen of how the body and brain interact to shape our minds. When most people think about what they plan to do in November, say, they have a hazy concept of the months ahead. But people with calendar synaesthesia can actually see a calendar in front of them, often in a strange formation – a hula hoop that touches them in the centre of their chest, for instance.

Where does the self begin and end? Find out more at New Scientist Live in London

He suspects this hints at the way our brains cope with the non-intuitive concept of months. “The brain didn’t have time in evolution for creating the representation of time – it’s too abstract. What evolution often does is take pre-existing hardware and re-tool it.” We did develop tools for conceptualising our surroundings. “So you take a spatial map, map time onto space, and you get a calendar.” For synaesthetes, that calendar seems to be visible in space.

Answering questions from his fans, Rama (as everyone knows him) is sparkly eyed and fun. But when Dorian tells him she thinks she has calendar synaesthesia, his demeanour changes. Leaning in, he quizzes her about her experiences. How does she see the world? Could she draw him a picture? He pulls out a piece of paper and she searches for a pen. Eager to see what she is going to draw, several onlookers offer their own. We all want a glimpse of the inner workings of her mind. She draws a loop to show how the calendar looks to her, with months coming off. Then she says she feels herself to be “sort of hovering above it”.

It’s not uncommon for Ramachandran to meet the people he studies through this sort of chance encounter, he later tells me. And occasionally they shine a light onto one of the hardest questions about what it means to be human: the nature of consciousness.

The reason this is so hard to study is because it is inherently subjective. “The first person singular does not exist in the physical world,” he says. “It’s a ghost.” He calls this the “vantage point problem”. But, he says, it doesn’t make consciousness impossible to study. You just have to find ways of showing that the subjective experience someone is telling you about is real – which is what Ramachandran specialises in. “You take the sense of self and say, OK, what can I say empirically?” he says.

“Consciousness is inherently subjective, it does not exist in the physical world”

Case studies can also help in revealing the blurry boundary between the self and the outside world. One of Ramachandran’s most unusual cases is a man called David, who has Capgras syndrome. This is usually characterised by the belief that a loved one has been replaced by an impostor. David, though, believes himself to be the impostor.

“He looks at his reflection and says ‘mom, that’s the real David. If he comes back, are you going to disown me?’,” says Ramachandran. When pressed for an explanation, David said the only logical one was that he had a long-lost twin and they were separated at birth. “It’s an ingenious solution to the dilemma that he’s in, and it sends a chill down your spine. It takes you into questions about what the self is.”

Our sense of self is also affected by those around us. For instance, when people with mirror-touch synaesthesia see someone else being touched it feels as though they are being touched in the same way. One of Ramachandran’s students has this: “If she sees someone else being tickled she feels a tickle in her armpit or her belly and she starts giggling. She feels the rhythmic motion first and then the mirth catches up.”

People who experience such dramatic differences in perception may be rare, but we are all capable of distorting our sense of self. A simple experiment can show how. Try looking at yourself in a double-reflecting mirror – two mirrors facing each other such that the second reflects the image in the first. Then raise your right arm. The first reflection is a normal mirror image, but the second is inversed, which we are not used to seeing. “So when you raise your right hand, it raises its right hand. It’s a doppelgänger, miming your behaviour,” Ramachandran says. Keep looking and something odd can happen to your sense of self. “You start experiencing that you are out there.”

Read more: Why be conscious – The improbable origins of our unique mind

What’s more, if you watch your arm moving in the second mirror, you may see a slight delay. As Ramachandran puts it, it’s slowed down as if your hand is moving through treacle. Exactly why this happens is something he and his team are working on, but we know that neurons in your brain telling your hand to move fire milliseconds before you consciously decide to move it. To avoid the sensation of being a puppet, your brain smoothes things out so that everything feels simultaneous. Ramachandran suspects that when you see this doppelgänger in the mirror, your brain doesn’t compute it as you – so the correction isn’t applied. In essence, you are seeing the unconscious machinery of the brain laid bare.

These insights build a picture of our consciousness as something very flimsy. When I put this to Ramachandran, he agrees: “It’s very tenuous, ephemeral.” He also concedes there is a limit to how much of consciousness we can unravel with his approach. “You can figure out the circuitry and all that, but it still leaves the qualia, or experiences – whether it’s an orgasm or the colour of red or the flavour of marmite or curry or whatever. That problem will remain with us until we find a new way to do science. Maybe it’ll be a permanent dual view of the world. The inside view and the outside view.”

V. S. Ramachandran is director of the Center for Brain and Cognition at the University of California, San Diego, and an adjunct professor at the Salk Institute