EMOTIONS and their COMMUNICATION

“There can be no knowledge without emotion. We may be aware of a truth, yet until we have felt its force, it is not ours. To the cognition of the brain must be added the experience of the soul.” (Arnold Bennett)

The term “EMOTION” engages a vast number of more-or-less nuanced states of more-or-less conscious feelings.   Wikipedia has undertaken an Emotion Project to describe as much of this situation as possible.  Their most direct definition of emotion (of many possible) is: “…a positive or negative experience that is associated with a particular pattern of physiological activity.” Emotions produce different physiological, behavioral and cognitive changes. The original role of emotions was to motivate adaptive behaviors that in the past would have contributed to the passing on of genes through survival, reproduction, and kin selection.[8][9] In other words we possess and express emotion because our evolutionary history has made it adaptive to do so. (There is however a possible spandrel argument: that is, emotions represent a side-effect or collateral effect or by-product of some other adaptive process)

With respect to representing our feelings as opposed to reasoned thought there is a great abundance of terms in many languages which in their subtlety are almost untranslatable. And brilliant neologisms (see John Koenig’s Berkeley TED talk on new words for emotion.  such as anemoia …

Communicating Emotions excerpted from the Wikipedia page page on Oculesics

“In the book Human Emotions, author Carroll Ellis Izard says “a complete definition of emotion must take into account all three of these aspects or components: (a) the experience or conscious feeling of emotion, (b) the processes that occur in the brain and nervous system, and (c) the observable expressive patterns of emotion, particularly those on the face” (p. 4).[28] This third component is where oculesics plays a role in nonverbal communication of emotion.

Oculesics is a primary form of communicating emotion.[29] The study of Neurolinguistic Programming (NLP) establishes three main types of thinking: in terms of what you see, hear or feel. According to this science, oculesics can show which type of thinking someone is using when they are communicating.[30] A person thinking visually might physically turn their eyes away, as if to look at an imagined presentation of what they are thinking, even to the point of changing the focus of their eyes. Someone thinking in terms of hearing might turn their eyes as much as possible to one of their ears. A person thinking in terms of what they feel could look downwards, as if looking toward their emotion coming from their body.[30]

Whether or not someone intends to send a particular meaning, or someone else perceives meaning correctly, the exchange of communication happens and can initiate emotion. It is important to understand these dynamics, because we often establish relationships (on small and grand scales) with oculesics.[29]” 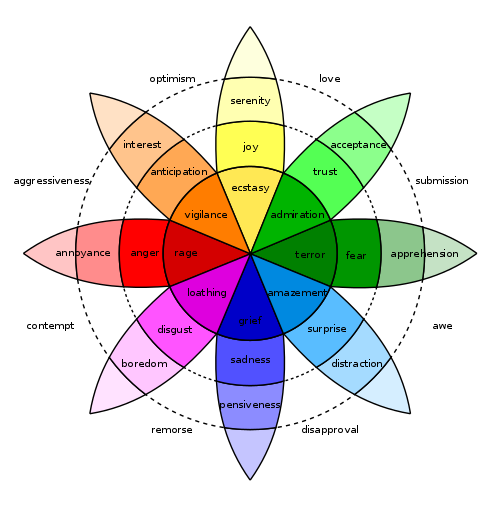 There are many theories on how to annotate a specific list of emotions. Two prominent methodologies come from Dr. Paul Ekman and Dr. Robert Plutchik (both professors are referenced above as well).

Dr. Plutchik says there are eight basic emotions which have eight opposite emotions, all of which create human feelings (which also have opposites). He created Plutchik’s Wheel of Emotions to demonstrate this theory.[32]

Perceptions and displays of emotions vary across time and culture. Some theorists say that even with these differences, there can be generally accepted “truths” about oculesics, such as the theory that constant eye contact between two people is physically and mentally uncomfortable.[33]

The following emotions and their associated eye behaviors come from Changing Minds.org:

In his essay The Coordinated Management of Meaning (CMM), Dr. W.Barnett Pearce discusses how people derive meaning in communication based on reference points gained or passed down to them culturally.[37]

While it may take a child a couple of years to speak understandably in a certain language, it is important to remember that the child is also learning the idiosyncrasies of nonverbal communication at the same time. In fact, the first couple of years of a child’s life are spent learning most of these nonverbals. The differences between cultures are thus ingrained at the very earliest points of development.

Anthropologists have proven for years that nonverbal communication styles vary by culture. Most people, however, are not only oblivious to the differences in these nonverbal communication styles within their own culture, but they also assume that individuals from other cultures also communicate in the same way that they do. This is a phenomenon called projected similarity.[40] The result of projected similarity is that misperceptions, misinterpretations, and misunderstandings occur in cross-cultural interactions when a person interprets another’s non- verbal communication in the light of his or her own cultural norms.[40]

While all nonverbal communication differs greatly among cultures, perhaps none is so obviously different as the movement and study of eye contact. A particular nonverbal interaction between two individuals can have completely different meaning in different cultures. Even within that same culture, oculesics plays a tremendous role in obtaining meaning from other nonverbal cues. This is why, even among the same culture, humans still have trouble sometimes understanding each other because of their varying eye behavior, nonverbal cues, and cultural and personal differences.[38]

It is because of these personal differences, that in studying cultural communication patterns we sometimes find it necessary to speak in stereotypes and generalizations. Just as one might say that Puerto Ricans who speak Spanish tend to use a louder voice than others communicating at the same distance, it would not be fair to say that all Puerto Ricans exhibit the same qualities. There are obviously enormous variations within each culture. These variations can depend on age, gender, geographical location, race, socioeconomic status, and personality. Because there are so many factors to study, most are generally glossed over in favor of stereotypes and generalizations.[40]

“Human vocalizations can convey emotion through the semantic content of particular phoneme combinations (words), as well as through the prosodic features of a vocalization (accentuation, intonation, rhythm). Throughout much of the past century, it was generally accepted that a string of phonemes (word) constitutes a linguistic sign via an arbitrary relationship between the phonemes and the referent, whereas prosody is thought to have an inherent, non-arbitrary emotional quality that is wholly independent from the semantic content (or lack thereof) in the vocalization. To illustrate, the string of phonemes used to identify a particular object may vary widely between languages, while a particular prosody can be universally understood to convey a particular emotion. Recent work, however, has begun to challenge this picture. In this study, we demonstrate for the first time that certain strings of English phonemes have an inherent, non-arbitrary emotional valence that can be predicted on the basis of dynamic changes in acoustic features.”  (From Myers-Schulz et al (2014).  Inherent emotional quality of human speech sounds.  https://www.ncbi.nlm.nih.gov/pmc/articles/PMC3620903/

IS LOVE an EMOTION?

Love is a DRIVE–a fundamental MOTIVE–associated with a basic NEED:  but like all drives that are challenged, it can be so intertwined with emotional expression it is often seen as an emotion

The Paul Ekman Group speaks to this (November 11, 2015).  The meanings of love are diverse:

“Let’s put aside loving your job or a piece of clothing in which the use of the word “love” is as a superlative. That still leaves romantic love and parental love: Are either of these emotions? I think not and here’s why-the time frame for emotions and love are radically different. Emotions sometime last as little as a few seconds, rarely more than an hour. Emotions come and go. If we recollect that we were mad for an hour or afraid for an hour close examination reveals that actually we felt that emotion a number of times within the hour, it wasn’t one continuous emotional episode.

In contrast, parental love is not momentary but endures for a lifetime. It is a commitment. Loving your children doesn’t mean that you might be afraid of the risks that they take, annoyed when they don’t show up for a meeting with you, sad when they are disappointed, and happy when they succeed.

While romantic love does not usually endure as long as parental love, sometimes it does, and even when it doesn’t, it’s not a momentary state but again a committed attachment during which many different emotions are felt. In parental love and romantic love, you care, you’re involved, and you’re more susceptible to experiencing a variety of emotions. And those emotions don’t endure, they come and go, lasting only seconds or at most minutes not a lifetime as is found in parental love and hoped for in romantic love.”

This view can be defended in scholarly detail: see “Is Love an Emotion?” by Arina Pismenny and Jesse Prinz (2017) in The Oxford Handbook of Philosophy of Love:   Excerpt:

“What kind of mental phenomenon is romantic love? Many philosophers, psychologists, and ordinary folk treat it as an emotion. This chapter argues the category of emotion is inadequate to account for romantic love. It examines major emotion theories in philosophy and psychology and shows that they fail to illustrate that romantic love is an emotion. It considers the categories of basic emotions and emotion complexes, and demonstrates they too come short in accounting for romantic love. It assesses the roles of culture and evolution in shaping the romantic love phenomenon and evaluates the ways in which the norms of rationality that are applied to standard emotions fail to apply to love. It considers the category of sentiments and argue that despite coming close, it does not adequately capture the nature of romantic love. Finally, the chapter makes a case for love being best characterized as a syndrome.”