Oliver Sacks on Narrative as the Pillar of Identity

“A person’s identity,” Amin Maalouf wrote in his brilliant treatise on personhood, “is like a pattern drawn on a tightly stretched parchment. Touch just one part of it, just one allegiance, and the whole person will react, the whole drum will sound.” In thinking about how identity politics frays that parchment and fragments the essential wholeness of our personhood, I was reminded of a poignant passage by neurologist Oliver Sacks (July 9, 1933–August 30, 2015), the poet laureate of the mind, from his 1985 classic The Man Who Mistook His Wife For A Hat (public library).

In the twelfth chapter, titled “A Matter of Identity,” Dr. Sacks recounts the case of a patient with a memory disorder that rendered him unable to recognize not only others but himself — unable, that is, to retain the autobiographical facts which a person constellates into a selfhood. To compensate for this amnesiac anomaly, the man unconsciously invented countless phantasmagorical narratives about who he was and what he had done in his life, crowding the void of his identity with imagined selves and experiences he fully believed were real, were his own, far surpassing what any one person could compress into a single lifetime. It was as though he had taken Emily Dickinson’s famous verse “I’m Nobody! Who are you?” and turned it on himself to answer with a resounding “I’m Everybody!” 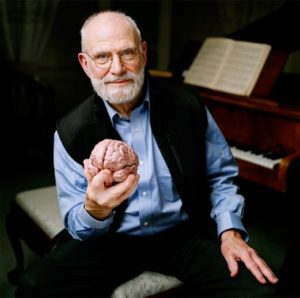 “Such a patient,” Sacks writes of the inventive amnesiac man, “must literally make himself (and his world) up every moment.” And yet that is precisely what we are all doing in a certain sense, to a certain degree, as we continually make ourselves and our world up through the stories we tell ourselves and others.

A decade after philosopher Amelie Rorty observed that “humans are just the sort of organisms that interpret and modify their agency through their conception of themselves,” Sacks examines the building blocks of that self-conception and how narrative becomes the pillar of our identity:

We have, each of us, a life-story, an inner narrative — whose continuity, whose sense, is our lives. It might be said that each of us constructs and lives, a “narrative,” and that this narrative is us, our identities.

If we wish to know about a man, we ask “what is his story — his real, inmost story?” — for each of us is a biography, a story. Each of us is a singular narrative, which is constructed, continually, unconsciously, by, through, and in us — through our perceptions, our feelings, our thoughts, our actions; and, not least, our discourse, our spoken narrations. Biologically, physiologically, we are not so different from each other; historically, as narratives — we are each of us unique.

Sacks considers the basic existential responsibility that stems from our narrative uniqueness:

To be ourselves we must have ourselves — possess, if need be re-possess, our life-stories. We must “recollect” ourselves, recollect the inner drama, the narrative, of ourselves. A man needs such a narrative, a continuous inner narrative, to maintain his identity, his self.

[i] The Man Who Mistook His Wife For A Hat remains a classic of uncommon illumination. Thanks to The Brain Pickings blog which suggests you complement this particular portion with Rorty on the seven layers of personhood and Borges on the nothingness of the self, then revisit Dr. Sacks on the three essential elements of creativity, the paradoxical power of music, what a Pacific island taught him about treating ill people as whole people, and his stunning memoir of a life fully lived.