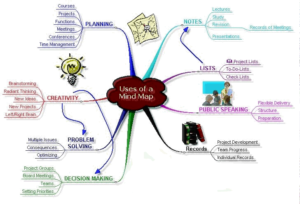 Mind maps (also called “concept maps”) are visual representations of what’s on your mind with particular attention to a specific target concept.  It is a kind of “free association” exercise in which you rapidly write down things that come to mind.   When you create one of these you may be amazed at some of the associations.  It essentially taps into IMPLICIT levels of consciousness which — because of your impulsiveness or spontaneity in expressing them  — may be important components of the EXPLICIT concept.  All concepts are built up from preceding experiences as your brain has more-or-less enabled you to perceive them and their interactions with each other.

A.K.A.: Concept maps a similar visual representations of ideas.   and see Wikipedia on MIND MAP –this can be a wonderful way of organizing thoughts, but is also an instrument of DISCOVERY.

A distinctive feature of mind-mapping in Art and Organism is its emphasis on speed and spontaneity.   In the manner of a “free-association” test,  doing this as quickly as possible is likely to evoke associations that that might never have been represented if you were thoughtful about your map -BUT which are nevertheless an important part of its meaning to you.  You will express connections to implicit or intuitive ideas in a nonjudgmental way.  Its spontaneity will result in a more authentic representation of what the focal term means to you.