Change of Mind by Jim Giles[i]

A brain haemorrhage turned an ex-convict into an obsessive artist. Jim Giles meets him and the scientists studying his case. 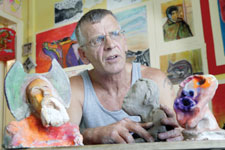 Creative urge: Tommy McHugh works on another sculpture in his art-packed living room in Liverpool.

Tommy McHugh was sitting on the toilet when his life changed. He felt a sudden and extreme headache, but something far more serious was occurring: blood was leaking from an artery in his brain. McHugh was suffering from a cerebral haemorrhage — an event that hospitalized him, altered his personality and, he says confidently, was the best thing that ever happened to him.

Standing in the bright London sunshine three years later, McHugh describes his new life. If I wasn’t there, he tells me, he would be manically painting, sculpting or writing poetry. It’s a statement those who knew McHugh before his stroke would find hard to believe. A former builder and heroin addict who has had stints in jail for violent offences, McHugh had no former interest in art. Now he spends almost all his time compulsively creating. “My life is 100% better,” he grins.

McHugh’s story is extraordinary but not completely unique. A handful of similar cases have been identified by neurologists in the United States. There are even rumours that Tom Cruise may play the part of one such patient in a forthcoming film. While the number of subjects remains small, only tentative conclusions can be drawn about how these artistic urges occur. But studies of patients such as McHugh could shed light on how our brains create art. “People like Tommy could reveal the key to artistic creativity,” says Mark Lythgoe, a neuroscientist at University College London (UCL).

It is hard going for Lythgoe, though — in part thanks to limitations on the methods he can safely use to investigate McHugh’s brain. Doctors stemmed McHugh’s bleeding by clamping a metal clip on the damaged artery. So he cannot be scanned using magnetic resonance imaging, as the magnetic fields could move the clip and cause further brain damage. Instead McHugh has had only computerized tomography scans, taken before and after the operation. These X-ray scans aren’t ideal for picking up subtle signs of brain damage — in McHugh, they show nothing unusual at all.

But McHugh’s art reveals some aspects of his altered thought processes. He often draws images of faces within faces, which he describes as representing two parallel lines of thinking that seem to run through his brain simultaneously.

In cognitive tests conducted by UCL psychologist Michelle de Haan, McHugh demonstrates a mix of abilities and deficiencies. He scores in the normal range for IQ, but he has difficulty switching trains of thought. When asked to list types of furniture, for example, he will rattle off chairs and tables like the rest of us. But when asked to switch to listing animals, he continues to talk about lamps and sofas. It’s a trait that becomes apparent when talking to McHugh: sentences tumble out relentlessly unless he is interrupted.

Similar deficits are seen in patients with damage to their frontal lobes, a region of the brain associated with high-level functions such as planning. This suggests McHugh may likewise be injured here.

That would make McHugh similar to patients studied by Bruce Miller of the University of California, San Francisco — one of the few neurologists to take an interest in the link between art and brain damage. Miller’s patients all have semantic dementia, a condition in which sufferers lose the ability to communicate through speech, caused by damage to the frontal and temporal lobes of the brain. About 20 such patients seen by Miller since 1990 also have a new and sometimes compulsive artistic interest or skill. In this set of patients, the damage is predominately to the left side of the brain (B. L. Miller et al. Br. J. Psychiatry 176, 458–463; 2000).

Areas on the right side of the brain are usually involved in artistic functions such as visual processing, face recognition and spatial awareness. But these are moderated by areas on the left-hand side. Perhaps, speculates Miller, damage to the left lessens this inhibition and causes patients to become more interested in art.

McHugh’s case is slightly different, as he has no speech impairment. But to understand exactly what is going on in McHugh’s brain, Lythgoe will need to find others with the same symptoms. “I have a feeling there are other people like Tommy out there,” Lythgoe says. “But unless the neurologists who are treating them have an interest in art they often don’t get followed up.”

In the meantime, Lythgoe and de Haan will run further tests on McHugh, who is only too glad to be involved in the research. Since meeting Lythgoe, he says, he has come to terms with the intense bouts of creativity that at first terrified him. He has given a talk about his work at the Dana Centre in London — a venue dedicated to debates on science. He has also met other artists who have the same compulsions as him — without brain damage. “They experience the same thing, so I realized I wasn’t alone,” says McHugh. “Meeting them has been my life-saver.”

[i] Jim Giles is a reporter for Nature based in London