…is associated with marks—drawings perhaps—made with a minimum of conscious attention.  It can have positive effects on memory, can relieve stress, (Wikipedia on Doodling), and may provide clues about non-conscious processing of information.

Representing one’s self in the absence of conscious attention is arguably a way to tap into non-conscious cognition.

It can also be associated with a very refined expression of feelings: Asian calligraphy is often regarded as amongst the highest forms of art. As associated with rapid mind-mapping, the free-association associated with spontaneity and authenticity can be highly revealing and an indication of “speaking from the heart”–representing the real “you,” not the you that you hope others will perceive. Such authenticity seems to be intrinsically attractive, imparting trustworthy expectations (that may be more important than “perfection”) indicating likely behavior in a much broader range of circumstances–for example in an emergency.

After lecturing at a conference in Beijing in 2004 I bought a book on calligraphy and learned about the evolution of Caoshu, “grass writing.”  (link to paper I gave there).

I was startled to see how my own doodles resembled caoshu as described in Shi Bo’s Between Heaven and Earth: A History of Chinese Writing (Shambhala 2003): “rapidly drawn strokes done very much at the urging of the author’s moods and feelings” (p64) an extreme expression “manifesting madness, passion, insolence… [using words that are illegible … sometimes called Kuangcao, “crazy calligraphy.” –p69) …   Also spotted a section of “grass style” (Ts’ai Shu) in Chiang Yee’s Chinese Calligraphy… a kind of rapid, rough sketch of ideas.

Saturday, October 26, 2019   early afternoon, I Might have dozed off but thinking about “asemic writing” the term applicable to many of my doodles… a new term to me that turned up in Pinterest just now and has a great Wikipedia entry.

Monday, December 2, 2019.   Writing has come to mean something we want learn.  A tool for understanding language.  I started trying when my mother read to me the contents of the little word balloons above the heads of the characters we looked at together at the breakfast table.   We know it is important because we’ve learned it provides more information (and we are ‘infovores’).  We learn the writing we grow up with, but learn eventually that other people may look at other squiggles that we don’t recognize.  But we do recognize a certain pattern of presentation to make reading easier: back-and-forth on the page… left to right—or the opposite, up & down.    In other words (pun?) certain shapes and patterns are saturated with meaning we do not understand.   (Monday, December 2, 2019)

(Chinese: “draft script,” or “grass script”) Wade-Giles romanization ts’ao-shu, in Chinese calligraphy, a cursive variant of the standard Chinese scripts lishu and kaishu and their semicursive derivative xingshu. The script developed during the Han dynasty (206 BC–AD 220), and it had its period of greatest growth during the Tang dynasty (618–907). In caoshu the number of strokes in characters are reduced to single scrawls or abstract abbreviations of curves and dots. Strokes of varying thickness and modulation show a great variety of shapes. Caoshu is not bound by rules for even spacing, and characters need not be of the same approximate size; the calligrapher thus has the fullest freedom of expressive movement of line. Caoshu can be subcategorized into three major forms that chronologically transmuted and developed as follows: (1) zhangcao (draft cursive), (2) jincao (modern cursive), and (3) kuangcao (wild, or “crazy” cursive).”    [grass script derives from idea of wind-blown grass: disorderly, yet orderly] 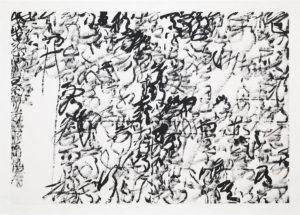 “Wang Dongling is widely recognized as one of the most celebrated living calligraphers from China. The artist is best known for his large-scale compositions, which are created on the floor with oversized brushes through highly physical movements. Historically, calligraphy has been regarded in China as the highest art form. Wang’s experimental approach to calligraphy, featuring his luanshu (chaos script), expands this venerated literati tradition through the artist’s dynamic style that renders the texts almost completely indecipherable. Wang’s expressive movements create a field of abstract gestures that prioritize the formal aesthetics of his script over its legibility. Language becomes a formalistic tool rather than the primary subject in traditional calligraphy. The resulting controlled chaos, in a nod to western gestural abstraction, alters the distinction between calligraphy and painting as well as the conventional relationship between reading and looking in relation to traditional Chinese calligraphy.

Laozi, Dao De Jing, Chapter I & II, presented publicly for the first time, was created specifically for Asia Society as part of a special performance given by the artist at the Museum on March 2, 2018. Meant to be read from right to left, the work is the first two chapters of Laozi’s Dao De Jing, a classic of Taoist philosophy written during the Warring States Period (475–221 BCE). The first chapter, “Embodying the Dao,” serves as an introduction of the Dao’s meaning and purpose. Chapter two, “The Nourishment of the Person,” outlines the concept that all experience is relative and that one must have a holistic perspective to gain enlightenment. Wang’s work is an excellent example of contemporary experiments in Chinese calligraphic techniques and the lasting interconnectedness between text, calligraphy, and painting. This exceptional piece is now part of the Asia Society Museum Collection of text- and calligraphy-based artworks.